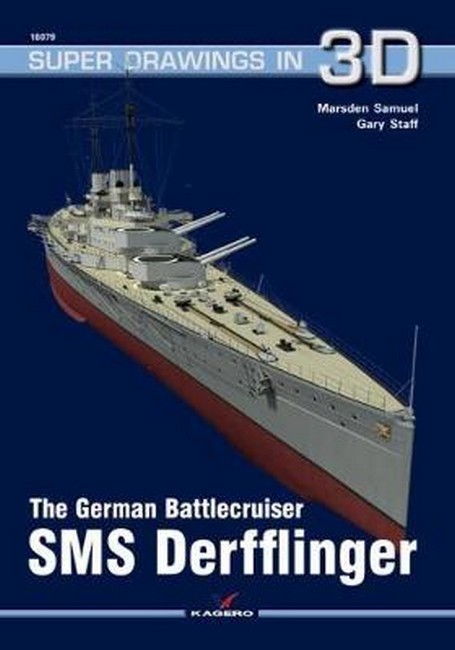 Super Drawings in 3D by Samuel, Marsden Code: 60169 Format: Paperback / 88 pages Publication date: 05/02/2021 Availability: Available. Usually dispatched from UK 1-2 business days Price: AU $55.66
The Derfflinger was considered to be the best class of battle cruisers up until the end of the First World War, and rightly so. Aesthetically they were also the most handsome. Design work was begun in October 1910 and continued until October 1912. Derfflinger had the sisterships Lutzow and the near sister Hindenburg. The design represented the birth of a new generation of German Grossen Kreuzer. After the final design of cruiser J there were still outstanding issues for the following design. In April 1910 the General Navy Department was asked to prepare the requirements for the cruiser of 1911. The issues were primarily the number of shafts, machinery and armament. A three shaft arrangement would allow the employment of a diesel engine on the centre shaft. The advantages of this were better thermal efficiency, easier transfer of fuel, saving in personnel and the price. The General Department thought the change to 30.5cm calibre was essential. The weight increase of 8-30.5cm guns over 10-28cm guns was just 36 tonnes and the latest English battleships were fitted with 300mm armour. If the cruisers were expected to fight in the line the increase was mandatory. However, von Tirpitz disagreed and the matter remained unresolved. 140 profiles, B2 drawing sheets
Format: Paperback
Pages: 88
Illustration: B&W THROUGHOUT
Availability: Available. Usually dispatched from UK 1-2 business days
Publisher: KAGERO OFICYNA WYDAWNICZA
Publication date: 05/02/2021
Country of publication: UNITED STATES
Weight: 0 g
Dimensions: 297.00mm X 210.00mm
Code: 60169