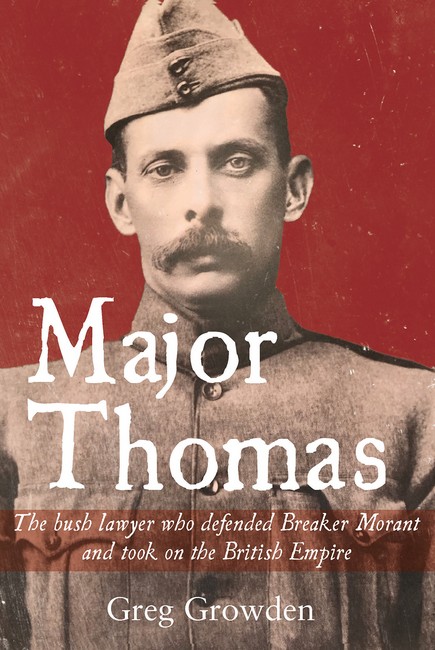 Opinion is still sharply divided on whether Breaker Morant and his Australian co-defendants were criminals who got what they deserved, or scapegoats used by the British Empire. Major Thomas, the bush lawyer drafted in at the last minute to defend them, is invariably depicted either as a hero or an incompetent fool. Now, for the first time, Greg Growden attempts to unravel the truth about the lawyer and soldier who returned from South Africa a broken man. Before the Boer War, Major Thomas had been a pillar of his community. He was a published poet, newspaper proprietor, lawyer and decorated soldier, but defending Breaker Morant became the defining episode of his life. The former King of Tenterfield endured a stunning fall from grace, slipping into bankruptcy and imprisonment. Thomas ended his days as an eccentric recluse, his life ruined by the ignominy and frustration of finding himself on the wrong side of history. For more than a century Major Thomas has been a footnote in diverging historical arguments. A proper hearing is long overdue.

Greg Growden was for more than three decades a senior sportswriter for The Sydney Morning Herald. He was The Sydney Morning Herald and Sun-Heralds chief rugby union correspondent between 1987 and 2012, and is one of only two international rugby writers to have covered all eight Rugby World Cups. After a six-year stint as Australian rugby correspondent for ESPN, he returned to The Sydney Morning Herald as a sporting columnist. He has written fifteen books, including A Wayward Genius - a biography of Australian Test cricketer Leslie Chuck Fleetwood-Smith, rated by renowned British writer Frank Keating as among the 100 best sporting books of the 20th century.