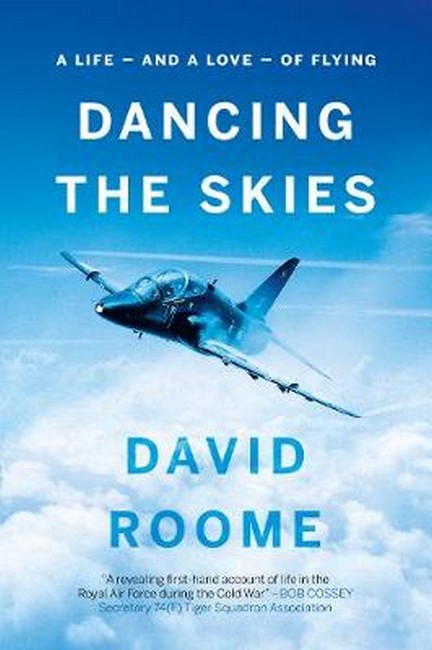 A life - and a love - of flying by Roome, David Code: 57823 Format: Paperback / 200 pages Publication date: 01/11/2019 Availability: Available. Usually dispatched from UK 1-2 business days Price: AU $25.52
Dancing the Skies charts the flying career of Group Captain David Roome, who joined the Royal Air Force aged 18 as a pilot and flew the supersonic Lightning with 74 (Tiger) Squadron in Singapore until the withdrawal of UK forces in 1971. After instructing on the Folland Gnat for 3 years, further tours followed on the F-4 Phantom and with the RAF's Central Flying School's Advanced Squadron of Examining Wing. After a ground tour as a member of the Tactical Evaluation Team assessing the readiness of all front-line RAF stations and units for war and a short return to the headquarters of the UK's fighter force he took command of a Phantom squadron. He subsequently returned to the staff of No 11 (Fighter) Group and in 1990 was made responsible for the detailed planning of the 168 aircraft flypast over London on 15 September 1990 as part of the commemoration of the 50th Anniversary of The Battle of Britain, for which he was appointed OBE. In 1994 he returned to the world of training, eventually rising to be responsible for the day-to-day running of RAF flying training, but by this time he had started to display historic jets and eventually qualified on all the RAF's jet fighters with the exception of the Swift and Javelin, flying he continued to enjoy after leaving the RAF in 2001 when he ran a company maintaining and displaying these historic aircraft from Kemble Airfield in Gloucestershire until, in 2003, when he moved to Cornwall and flew the BAe Hawk operating in support of RN ships training in the Channel. He retired from flying on his 65th birthday after 46 years of flying and almost 8000 flying hours and now lives in Cheltenham with his wife Sandy.
Format: Paperback
Pages: 200
Availability: Available. Usually dispatched from UK 1-2 business days
Publisher: BOOK GUILD PUBLISHING LTD
Publication date: 01/11/2019
Country of publication: UNITED KINGDOM
Weight: 0 g
Dimensions: 234mm X 156mm
Code: 57823