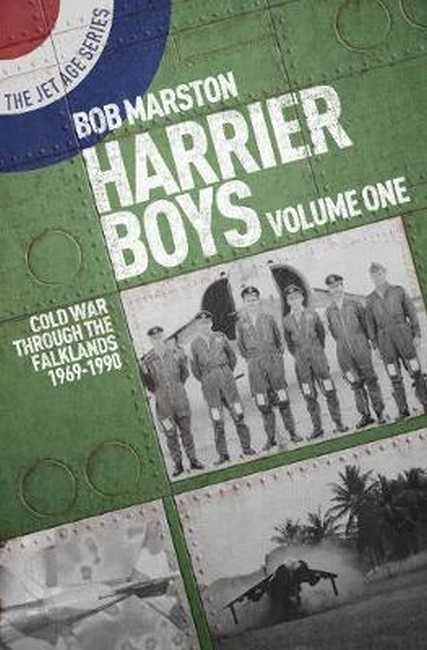 Cold War Through the Falklands 1969-1990 by Marston, Robert Code: 59247 Format: Paperback Publication date: 01/07/2020 Availability: Available. Usually dispatched 1-2 business days Price: AU $34.99
In Harrier Boys, Volume One: Cold War Through the Falklands, 1969-1990, Bob Marston, who flew Harriers for many years, draws together accounts from others who worked with this unique jet through its history. The excitement, camaraderie and pride of Harrier operators shine through in the personal stories of those whose lives were changed by their experience of this iconic aircraft, both on land and at sea. In this first volume, events of the Cold War years are brought to life by contributors including Graham Williams, who flew the Transatlantic Air Race, Peter Dodworth, a member of the original Harrier Conversion Team, Peter Harris, a participant in the early defence of Belize, Sir Peter Squire, OC 1 (F) Squadron during the Falklands conflict, and Australian Dave Baddams, who commanded the Royal Navy Sea Harriers of 800 Squadron. AUTHOR: After completing the Harrier course on 233 Operational Conversion Unit, Bob Marston joined 1 (Fighter) Squadron finishing the tour qualified as a fighter reconnaissance instructor. After two years of flying Harrier displays, he became a Hawk qualified flying instructor before returning to Wittering as a Harrier QFI on 233 OCU later being awarded the Air Force Cross. Promoted to squadron leader, he became a flight commander on 3 (Fighter) Squadron based at Gutersloh. Finishing the tour as the squadron executive officer he was awarded the Queen's Commendation for Valuable Service in the Air. Promoted to wing commander, he flew the Jaguar as OC Operations Wing at RAF Coltishall, before moving into the training world at RAF Cranwell, where he was made group captain and became OC 1 Elementary Flying Training School, responsible for all light aircraft flying training for UK armed forces. On retirement he became a reservist flying instructor, eventually completing a forty year flying career. He flew some 6,400 hours in his RAF career, 3,300 of them in the Harrier.
Format: Paperback
Availability: Available. Usually dispatched 1-2 business days
Publisher: GRUB STREET
Publication date: 01/07/2020
Country of publication: UNITED KINGDOM
Weight: 0 g
Dimensions: 234.00mm X 156.00mm
Code: 59247