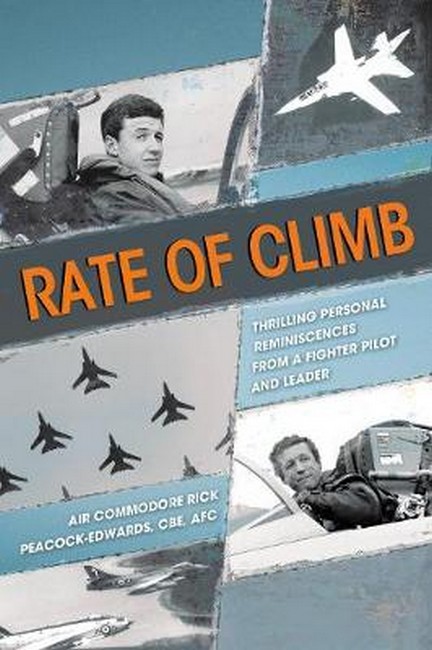 Thrilling Personal Reminiscences from a Fighter Pilot and Leader by Peacock-Edwards, Air Commodore Rick Code: 58829 Format: Hardback / 224 pages Publication date: 30/08/2020 Availability: Future Publication. Pre-order now. Due date: August 2020 Price: AU $69.99
Rick Peacock-Edwards has led different lives at different times, but through it all has used a bonus in life nowadays often overlooked: he has consistently enjoyed himself. One of three brothers of outstanding South African Battle of Britain pilot F/O S R 'Teddy' Peacock-Edwards, his subtle and compassionate regard for a generation of wartime aircrew is clear: "As the proud son of one of the 'Few', their selfless daring has inspired me throughout my life. Importantly, they influenced my decision to become an airman in the Royal Air Force, to become a fighter pilot like my father, and to live life with spirit as they had lived their lives. It is essential that their experiences live on." Rate of Climb, his original and continually entertaining biography, drawing on previously unpublished family and archival material, shows Rick in complete command of his primary subject: flying. A leading ex-RAF fighter pilot to his fingertips, he flew the Lightning, Phantom, Tornado F2/3 and other high-performance aircraft, and served in senior-ranking positions in the UK, Germany and the US. During a varied and distinguished career he was closely associated with the Eurofighter Typhoon programme and was appointed as the Royal Air Force Inspector of Flight Safety. He ably demonstrated his uncommon skill and determined leadership during the Cold War era, first Gulf War and elsewhere. A past master of The Honourable Company of Air Pilots, he is a Fellow of the Royal Aeronautical Society and the immediate past vice chairman of the Royal Air Force Club in London. He is equally as engaged in his post-RAF career as he was when a serving officer. This is an action-packed account of a foremost flyer's life with endless good stories, and a colourful cast of characters to match. Rick's compelling recollections in Rate of Climb reveal a life of considerable achievement, in a very personal book capturing the ties of airmanship that the author has been privileged to share. A must for all lovers of derring-do in the air.
Format: Hardback
Pages: 224
Availability: Future Publication. Pre-order now. Due date: August 2020
Publisher: GRUB STREET
Publication date: 30/08/2020
Country of publication: UNITED KINGDOM
Weight: 0 g
Dimensions: 234mm X 156mm
Code: 58829