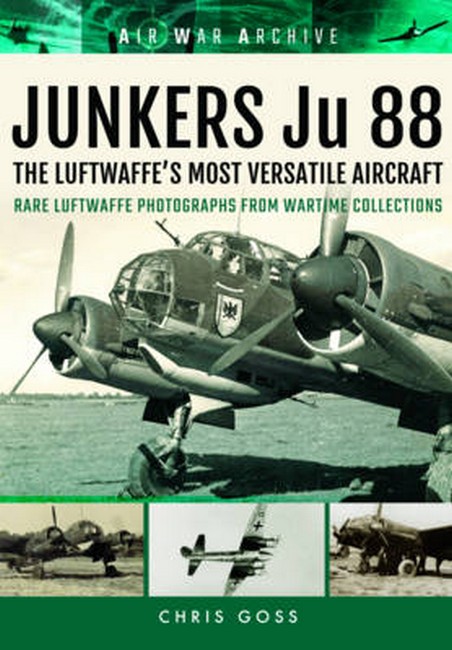 Rare Luftwaffe Photographs from Wartime Collections by Goss, Chris Code: 40458 Format: Paperback / 128 pages Publication date: 30/07/2016 Availability: Available. Usually dispatched 1-2 business days Price: AU $44.99
Designed as a fast bomber that could out-run the fighters of the era, the twin-engine Junkers Ju 88 became one of the most versatile aircraft of the Second World War. Such was the success of the design that its production lines operated constantly from 1936 to 1945, with more than 16,000 examples being built in dozens of variants - more than any other twin-engine German aircraft of the period. From an early stage it was intended that it would be used as a conventional light bomber and as a dive-bomber. As such, it served in the invasion of Poland, the Norway campaign, the Blitzkrieg and the invasion of France and the Battle of Britain. It went on to operate in North Africa, formed a key part of the air assault in Operation Barbarossa, and was vital to the Luftwaffe's defence of Germany in the face of the Allied bomber offensive. It was also adapted for use as a fighter, night fighter, torpedo bomber, reconnaissance aircraft and even as a Mistel flying-bomb. It was used effectively against both land targets and shipping.In this selection of unrivalled images collected over many years, and now part of Frontline's new War in the Air series, the operations of this famous aircraft are portrayed and brought to life.
Format: Paperback
Pages: 128
Illustration: B&W THROUGHOUT
Availability: Available. Usually dispatched 1-2 business days
Publisher: FRONTLINE BOOKS
Publication date: 30/07/2016
Country of publication: UNITED KINGDOM
Weight: 0 g
Dimensions: 246mm X 189mm
Code: 40458