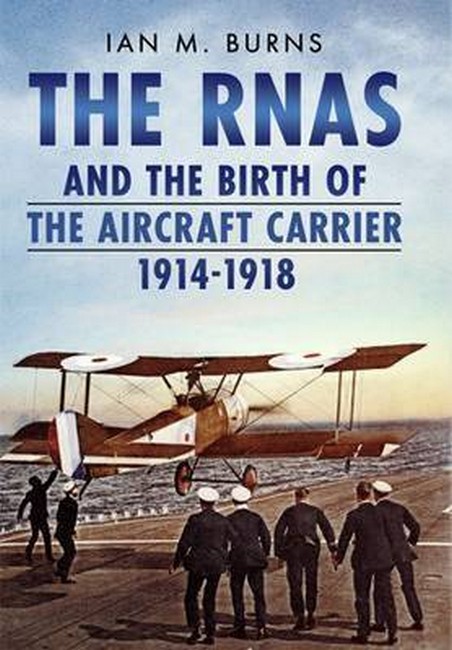 by Ian M. Burns Code: 50847 Format: Hardback / 208 pages Publication date: 01/10/2014 Availability: In Stock. Usually dispatched same business day from Sydney, Australia Price: AU $33.00 (was AU $55.00) You save AU $22.00
The Royal Naval Air Service (RNAS) origins were as the Naval Wing of the Royal Flying Corps in April 1912, but did not become a separate service until 1 July 1914. However, from the very beginning, the Naval Wing conducted itself as a distinct organisation. Its members commenced creating a dedicated arm of the Royal Navy with the intention of operating aircraft in support of and in association with the Fleet. On the outbreak of war in August 1914, the service quickly expanded to include service on land, initially in support of the Royal Naval Division in Belgium, later providing support to the Royal Flying Corps and as one of the early practitioners of strategic bombing. However, The RNAS and the Birth of the Aircraft Carrier 1914-1918 principally traces the development and operational use of aircraft serving with the fleet. It follows the selection and training of personnel and the struggle to produce suitable aircraft and weapons, including the evolution of the aircraft carrier. Nonetheless, the constant thread throughout will be the operational history of the RNAS over the North Sea with both the Grand Fleet and Harwich Force. Commencing over the Zeppelin base at Cuxhaven on Christmas Day 1914 the ending with two pivotal operations which determined the future of naval aviation, including the raid on Tondern which saw the first instance of carrier-launched airtcraft.The Royal Naval Air Service and the Royal Flying Corps merged in 1918 to become the RAF - yet those early years in World War One shaped the way that sea-based aircraft operated throughout the 20th Century - and beyond.
Format: Hardback
Pages: 208
Availability: In Stock. Usually dispatched same business day from Sydney, Australia
Publisher: FONTHILL
Publication date: 01/10/2014
Country of publication: UNITED KINGDOM
Weight: 560 g
Dimensions: 234mm X 156mm
Code: 50847

Ian M. Burns worked in the aviation industry in the UK and Canada for forty-five years before retiring in 2012. For many of those years, he has been active in researching the history of British Naval Aviation during the First World War. He has written articles for Aeroplane Monthly, Cross and Cockade Journal, Over The Front and Jabberwock (The Journal of the Society of Friends of the Fleet Air Arm Museum). In 2008, Burns published a book on the history of the seaplane carrier HMS Ben-my-Chree that was selected as an Aeroplane Monthly Book of the Month