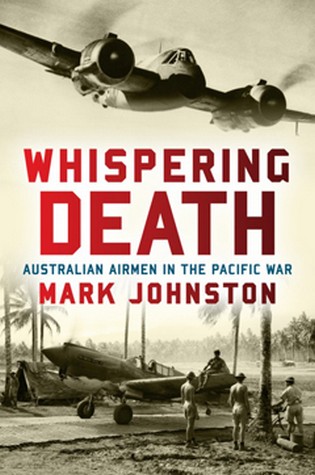 by Mark Johnston Code: 24590 Format: Paperback / 536 pages Publication date: 11/01/2011 Availability: Available. Usually dispatched 1-3 business days Price: AU $35.00
Publisher's Notes: Powerful, authoritative and provocative, this is the first one-volume history of the RAAF's immense conflict with Japan. In Whispering Death, Mark Johnston, one of Australia's leading experts on World War II, explains vividly how more than 130,000 Australian airmen fought Japan from the Pacific War's first hours in 1941 to its last in 1945. They clashed over a vast area, from India to Noumea, Bass Strait to the Philippines. Merely flying over that region's boundless oceans and wild weather was dangerous enough for Australia's fliers, but their formidable enemies made it much more perilous. In their Zero fighters and Betty bombers they were initially too numerous, experienced and well-armed for the few Australians who opposed them in Malaya, the Northern Territory and New Guinea. February 1942 brought the RAAF its darkest hour: the bombing of Darwin, which no Australian fighter planes contested. But in the months following, Australian aircrew won or contributed to great aerial victories in the air over Port Moresby, Milne Bay, the Papuan beachheads and the Bismarck Sea. The American air force grew to dominate both the Japanese and their Australian ally, but until war's end Australian aircrew continued to battle in Pacific skies, and to die in flaming aircraft or at the hands of vindictive captors. Some pilots, such as aces Clive 'Killer' Caldwell and Keith 'Bluey' Truscott became household names. Certain Australian aircraft caught the public imagination too: the Kittyhawk, the Spitfire and the plane dubbed 'Whispering Death' for its eviscerating firepower and deceptively quiet engines - the Beaufighter. Australia's flight to victory was never smooth, thanks to internal squabbling at the RAAF's highest levels and a difficult relationship with the allies on whom Australia depended for aircraft and leadership. So controversial were the RAAF's final operations that some of its most prominent pilots mutinied. Based on thousands of official and private documents, Whispering Death makes for compelling reading.
Format: Paperback
Pages: 536
Availability: Available. Usually dispatched 1-3 business days
Publisher:
Publication date: 11/01/2011
Country of publication: AUSTRALIA
Weight: 824 g
Dimensions: 230mm X 154mm
Code: 24590