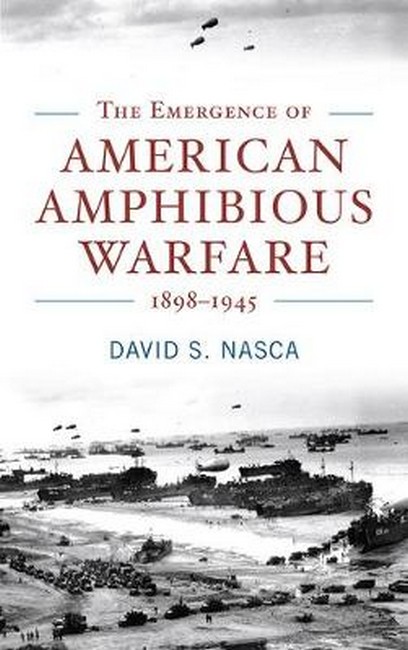 The Emergence of American Amphibious Warfare 1898-1945

by Nasca, David S. Code: 58999 Format: Hardback / 320 pages Publication date: 30/10/2020 Availability: Available. Usually dispatched from USA 1-2 business days Price: AU $64.71
The Emergence of American Amphibious Warfare, 1898-1945 examines how the United States became a superpower through amphibious operations in order to project military power. While other major world powers pursued and embraced different weapons and technologies in order to create different means of waging war, the United States was one of the few countries that spent decades training, developing, and employing amphibious warfare to pursue its national interests. Commonly seen as dangerous and costly, amphibious warfare was carefully modernized, refined, and promoted within American political and military circles for years by a small motley group of military mavericks, intellectuals, innovators, and crackpots. This generational cast of underdogs and unlikely heroes were able to do the impossible by predicting and convincing America's leadership how the United States should fight the Second World War. From the United States' first tentative steps in landing troops from the sea in Cuba during the Spanish-American War to the iconic flag raising of U.S. Marines in Iwo Jima during the Second World War, Amphibious Warfare and U.S. Geopolitical Strategy, 1898-1945 is a historical journey of the United States' rise to greatness. Through amphibious warfare, the United States underwent an extraordinary transformation in such a short period from backwater republic to global superpower.The Emergence of American Amphibious Warfare 1898-1945 is an analytical study that focuses on the people, events, technologies, and conflicts that shaped and modernized amphibious warfare. In addition, we also see how the United States patiently pursued a deliberate and systematic approach in adopting a form of warfare that many rival powers saw as antiquated and impractical in an increasingly technological and industrialized world. As a result, the United States' unlikely and meteoric rise in the first half of the 20th century not only shocked the world, but dramatically transformed the balance of power in the international system. In conclusion, The Emergence of American Amphibious Warfare 1898-1945 reveals that despite new ways for states to project military power today as seen with airpower, nuclear weapons, cyber warfare, and special operators, amphibious warfare has proven to be the most important in transforming the United States and the world. In understanding how amphibious warfare allowed the United States to achieve geopolitical supremacy, competitor states are now looking at America's amphibious past as a potential option to challenge the United States' global leadership and expand its power and influence in the world.
Format: Hardback
Pages: 320
Illustration: B&W THROUGHOUT
Availability: Available. Usually dispatched from USA 1-2 business days
Publisher: NAVAL INSTITUTE PRESS
Publication date: 30/10/2020
Country of publication: UNITED STATES
Weight: 0 g
Dimensions: 229mm X 152mm
Code: 58999