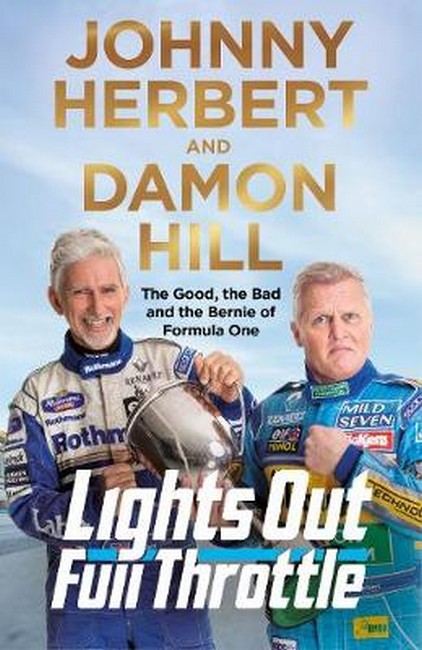 Laurel and Hardy, Ant and Dec, Morecambe and Wise, Herbert and Hill. The history of entertainment is studded with brilliant comic duos.

Having retired from racing, Johnny and Damon have become the one constant for passionate English F1 fans in a rapidly changing landscape.They have earned cult status as commentators and pundits, with viewers loving their unerring dedication to the sports greatness. Drawing on a lifetime of sniffing petrol fumes, Lights Out, Full Throttle stands large over the landscape of Formula One and takes the temperature of the good, the bad and the ugly of the petrol-heads paradise.

Lights Out, Full Throttle takes F1 fans on a tour of the sport - from Monaco to Silverstone, Johnnys crowd-surfing and Bernies burger bar, the genius of Adrian Newey and Colin Chapman, Martin Brundles hush puppies, why Lewis Hamilton will never ever move to Ferrari (probably), getting the yips, money, safety, the future of the sport, and what its like to have an out of body experience while driving a car in the pouring rain at 200mph.

Whether youre a fan of Nigel, Niki, Kimi or Britney, pine for the glory days of Brabham, Williams, Jim Clark and Fangio, or believe that Lewis is one year away from retiring as the GOAT, Lights Out, Full Throttle is the oily rag for the petrol-head fan to inhale while waiting for the racers to line up on the grid.

Damon Hill is a former Formula One World Champion who raced against some of the legends of the sport from Ayrton Senna to Michael Schumacher. The son of racing legend Graham Hill, Damon entered Formula One in 1992, racing for Brabhams and then Williams and took over as team leader when Senna died in 1994. Having lost the 1994 World Championship to Schumacher by a single point, Hill was crowned World Champion in 1996. He is also the author of his autobiography Watching the Wheels, which was a Sunday Times number one bestseller.

Johnny Herbert is one of a small number of British drivers to win a Grand Prix since the 1970s, tasting success with Benetton at Silverstone and Monza in 1995, then delivering a one and only top podium place for Jackie Stewarts team at the 1999 European Grand Prix at the Nurburgring. He also became the first active Formula 1 driver to win the endurance classic 24 Hours of Le Mans, with Bertrand Gachot and Volker Weidler in 1991, and has been a champion at karting, the Formula Ford Festival, Formula 3, the European Le Mans and the Speedcar Series in his long and varied career. He has also written his autobiography What Doesnt Kill You . . ., which was published to acclaim in 2016.

Herbert and Hill work together as pundits on Sky Sports award-winning coverage of Formula 1.