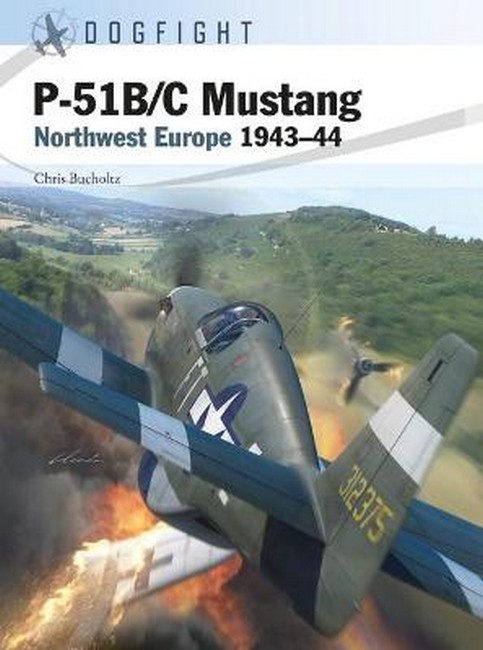 Northwest Europe 1943-44 by Bucholtz, Chris Code: 61711 Format: Paperback / 80 pages Publication date: 07/02/2022 Availability: In stock at supplier. Usually dispatched 3-7 business days Price: AU $29.99
This new volume straps the reader into the cockpit of the P-51B/C as the Mustang-equipped fighter groups of the 'Mighty Eighth' Air Force attempt to defend massed heavy bomber formations from deadly Luftwaffe fighters charged with defending the Third Reich. Luftwaffe Reichsmarschall Hermann Goering admitted that the appearance of long-range Mustangs over Berlin spelled the end of the Jagdwaffe's ability to defeat American daylight bombing. But the Mustang was far more than an escort - it was a deadly hunter that could out-perform nearly every German fighter when it was introduced into combat. Entering combat in Europe in December 1943, P-51Bs and P-51Cs had advantages over German Bf 109s and Fw 190s in respect to the altitude they could reach, their rate of climb and top speed. Initially tapped for close bomber escort, Mustangs were quickly turned loose to range ahead of the bomber stream in order to challenge German fighters before they could assemble to engage the bombers en masse. Thanks to the Mustang's superior performance, USAAF pilots effectively blunted the Luftwaffe's tried and tested tactic for destroying B-17s and B-24s. Boldness and aggression in aerial combat meant that P-51B/C pilots inflicted a rapidly mounting toll on their German counterparts in the West during the early months of 1944, contributing mightily to Allied air superiority over northern France on D-Day. This volume, packed full of first-hand accounts, expertly recreates the combat conditions and flying realities for Mustang pilots (including headline aces such as Don Blakeslee and Don Gentile, as well as lesser known aviators). It is heavily illustrated with photographs, artwork and innovative and colourful 3D ribbon diagrams, which will provide a realistic overview of the most dynamic dogfights in aviation history.
Format: Paperback
Pages: 80
Availability: In stock at supplier. Usually dispatched 3-7 business days
Publisher: OSPREY
Publication date: 07/02/2022
Country of publication: UNITED KINGDOM
Weight: 264 g
Dimensions: 248.00mm X 184.00mm
Code: 61711

Chapter 1 In Battle The story of the Medal of Honor-earning mission of Col James Howard on 11 January 1944, in which he defended bombers single-handedly for 30 minutes and scored three victories, plus a probable. Chapter 2 Setting the Scene The development of the Merlin/Mustang combination, manufacturing, the P-51B/C's introduction into combat and the transition of existing USAAF fighter units from the P-47 to the Mustang. Chapter 3 Path to Combat The careers of two Mustang pilots - Kelly Gross of the 354th FG, who went five months without a victory (but later became an ace) and named his plane 'Live Bait!' after the instructions given to him by his commanding officer, and William Whisner of the 352nd FG, who destroyed six of his eventual 16.4 German aircraft in a P-51B christened 'Princess Elizabeth' after he met the future monarch. Chapter 4 Weapon of war A brief technical appraisal of the P-51B/C, detailing its development and the weaponry it employed, including issues that needed to be resolved with its 0.50-calibre guns and fuselage tank, and performance differences between the P-51B/C and the later P-51D/K. Chapter 5 Art of War Examination of the various co-operative tactics employed for dealing with Bf 109 and Fw 190 escorts, Werfer-Granate 21-firing Bf 110s, Do 217s and Ju 88s, and Sturmbocke bomber-destroyer Fw 190s; "zoom-and-boom" energy attacks; and tactics for maintaining formation discipline when opposing high-speed diving attacks by German fighters. Chapter 6 Combat In this chapter, Mustang pilots discuss combat against the Bf 109, Fw 190 and bomber-destroyer types, as well as the declining quality of their opposition from 'Big Week' through to D-Day. Aftermath Appendices Acknowledgments Selected Sources Index