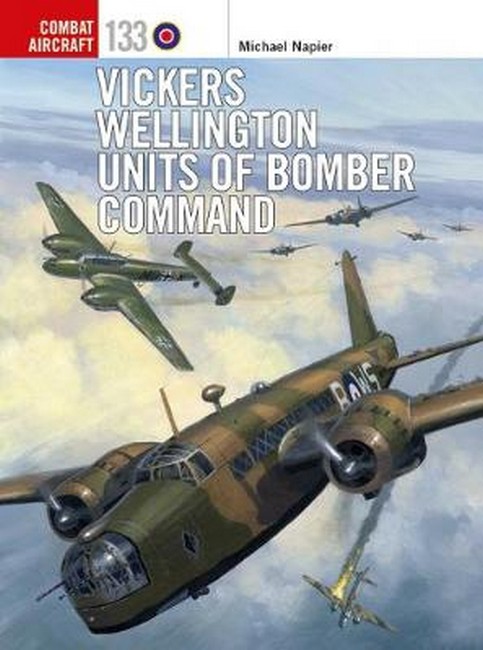 The Vickers Wellington was one of very few aircraft types to have been in production and frontline service throughout World War II, and more than 10,000 Wellingtons were built in the period. They took part in the first RAF bombing mission of the conflict when, on 4 September 1939, 14 examples from Nos 9 and 149 Sqns undertook a daring daylight attack on the Kiel Canal. However, after suffering high losses on follow-up raids, Wellingtons were withdrawn from daytime missions and began to operate at night from May 1940. They subsequently took part in raids against the Italian port city of Genoa in July 1940, and against Berlin the following month, followed by key missions in the Battle of the Barges in September and October, as the RAF targeted the Germanys invasion fleet being assembled in French Channel ports. When RAFs strike force expanded the next year following the introduction of the improved Wellington II, the 21 squadrons equipped with the Vickers aircraft, which included Polish-, Canadian- and Australian-manned units, formed the backbone of the Bomber Command night bombing force. Over the next two years Wellingtons participated in all the major operations by Bomber Command, including the daylight raid against German battleships in Brest harbour in July 1942 and the first three Thousand Bomber raids in the summer of 1942. This illustrated study explores the design, development, and deployment of the Vickers-Wellington type, charting its role in World War II from its earliest missions to its use in training after its withdrawal from frontline bomber missions in 1943. The text is supported by stunning full-colour artwork.

Chapter 1The design and development of the Wellington Origins of Specification B.9/32, geodetic construction. Pre-war service with Bomber Command, training exercises, preparations for war. Chapter 2 Early operations First daylight raid of the war against Kiel Canal on 4 September 1939 and subsequent daylight operations. Night missions, including raids on Genoa in July 19 40, Berlin in August 1940 and the Battle of the Barges in September/October 1940. Anti-mine operations by Directional Wireless Installation Wellingtons. Chapter 3 Operations 1941 Expansion of Wellington squadrons, including Polish, RCAF and RAAF units, eventually equipping 21 squadrons. Main force night operations against Germany - Wellingtons make up the backbone of Bomber Command. Chapter 4 Operations 1942/43 Continued operations, including Thousand Bomber raids in summer 1942, daylight raid against Brest in July 1942. First Wellington Pathfinder Force unit No 156 Sqn in August 1942. Withdrawn from frontline bomber operations in 1943. Chapter 5 Training The Wellington was used for training bomber crews both during the early years of the war and also after the withdrawal of the type from frontline operations. It equipped 25 OTUs. The OTUs also participated in the Thousand Bomber raids. Appendices - Listing all units equipped with the Wellington and where they were based - Comprehensive colour plates commentaries.

Michael Napier is the author of six books on aspects of aviation and military history, including the highly successful Royal Air Force - A Centenary of Operations, published by Osprey. He is an authority on the history of No 14 Sqn RAF, a unit which operated the Wellington in the anti-submarine role. Michael is an ex-RAF Tornado GR 1 pilot and has been an airline pilot for the last 21 years. He lives near Chipping Norton, Oxfordshire. Janusz Swiatlon lives in Krakow, Poland. A veteran of service with the Polish Armys 6th Pomorska Dywizja Powietrzno-Desantowa (an airborne unit) in the 1980s, he is both an enthusiast of aviation historian and a military modeler. As an illustrator, he has created numerous colour aircraft profiles published in magazines and books by AF Editores, Kagero, Chevron, Stratus and other publishing houses, including Osprey.