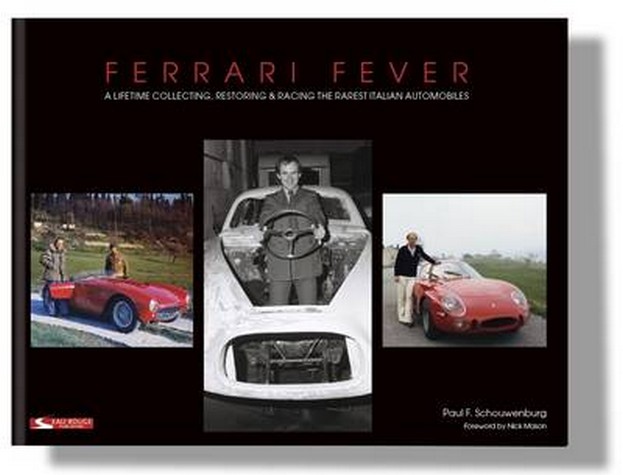 Ferrari Fever is a fascinating and nostalgic look back at the classic car collecting scene in the ‘60s and ‘70s, an era when some of the rarest and most interesting Italian automobiles could still be found hidden or languishing in barns, junkyards or by the side of the road…almost lost in time.

Paul Schouwenburg’s story begins in wartime occupied Amsterdam, a poignant backdrop to the hardships of the years to follow, when the appearance of any exotic Italian thoroughbred was a rare sight indeed. Fuelled by a fascination for all things mechanical, adventures on a Rudge bicycle and early experiences in his parents’ succession of Rovers, Paul gains a burning passion for finding, restoring, and ultimately racing Italian cars. But these were not just any Italian cars -from the early ‘60s onwards, he begins to uncover several rare Alfas, from 1900CSS Zagato to Tipo 33/2, in addition to a host of very special Ferraris, including a 250GTO, 340 America Touring, 250 MM Vignale Berlinetta, 250GT SWB Competition/61 and 275GTB/C/LM, usually by word of mouth or tenuous rumour. Having acquired them, often many different models at a time, he would drive them home across Europe through snow storms, and restore them single-handedly in his spare time, full-time job as a world-leading head and neck cancer surgeon permitting! If that wasn’t exciting enough, he would then race them, often winning, before moving on to the next irresistible project.

Filled with rich anecdotes and rare insights into the colourful characters of the day, including Jacques Swaters and Rob de la Rive Box, Paul’s passion and incredible drive make for exciting reading. Indeed this is a unique take, a look in the rear view mirror at a bygone era when gems could be found incredibly cheaply and enthusiasts took seat-of-the-pants decisions regarding many aspects of a hobby which was uncharted, innocent and simply not as commercial as today – he couldn’t even give away his 250 GTO at the time! The world has changed beyond recognition since his intense car hunts of the ‘60s and ‘70s; accounts of that era’s version of the classic car hobby are as rare as this story is enjoyable to read. Throughout the years his devoted family accompanies him every step of the way in his passion, an infectious one, and his sons now share a respected classic car restoration business, building on the foundations laid by their father.