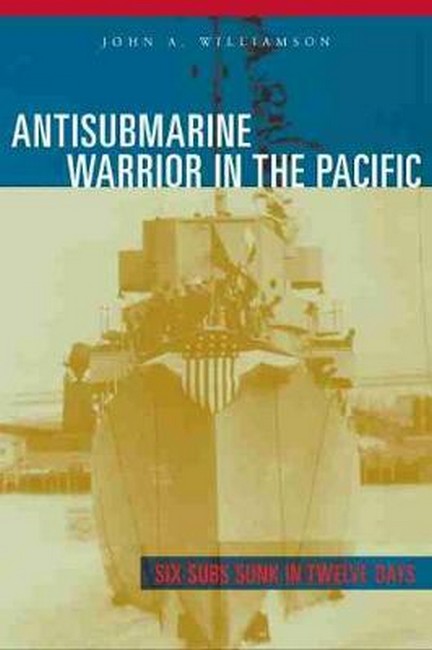 Antisubmarine Warrior in the Pacific

Six Subs Sunk in Twelve Days by Williamson, John A. Code: 60307 Format: Paperback / 244 pages Publication date: 01/02/2021 Availability: Available. Usually dispatched 1-3 business days Price: AU $35.00
The USS England was a 1200-ton, 306-foot, long-hull destroyer escort. Commissioned into service in late 1943 and dispatched to the Pacific the following February, the England and its crew, in one 12-day period in 1944, sank more submarines than any other ship in U.S. naval history: of the six targets attacked, all six were destroyed. For this distinction, legendary in the annals of antisubmarine warfare, the ship and her crew were honored with the Presidential Unit Citation. After convoying in the Atlantic, John A. Williamson was assigned to the England - first as its executive officer, then as its commanding officer - from the time of her commissioning until she was dry-docked for battle damage repairs in the Philadelphia Naval Yard 15 months later. Besides being a key participant in the remarkable antisubmarine actions, Williamson commanded the England in the battle of Okinawa, where she was attacked by kamikaze planes. Williamson narrates his memoir with authority and authenticity, describes naval tactics and weaponry precisely, and provides information gleaned from translations of the orders from the Japanese high command to Submarine Squadron 7. The author details the challenges of communal life aboard ship and explains the intense loyalty that bonds crew members for life. Ultimately, Williamson offers a compelling portrait of himself, an inexperienced naval officer who, having come of age in Alabama during the Depression, rose to become the most successful WW II antisubmarine warfare officer in the Pacific.
Format: Paperback
Pages: 244
Illustration: B&W THROUGHOUT
Availability: Available. Usually dispatched 1-3 business days
Publisher: THE UNIVERSITY OF ALABAMA PRES
Publication date: 01/02/2021
Country of publication: UNITED STATES
Weight: 0 g
Dimensions: 229.00mm X 152.00mm
Code: 60307

Preface 1. From Sweet Home Alabama to the Navy 2. Gearing Up for War 3. North Atlantic Convoys 4. Armed Guard 5. Sub-Chaser Training 6. PC Commander 7. The Birth of USS England 8. Pollywogs in the Pacific 9. The Twelve Days of USS England 10. The Aftermath 11. Prelude to the Philippines 12. Combat Plus 13. A Suicide Bombing 14. Home at Last