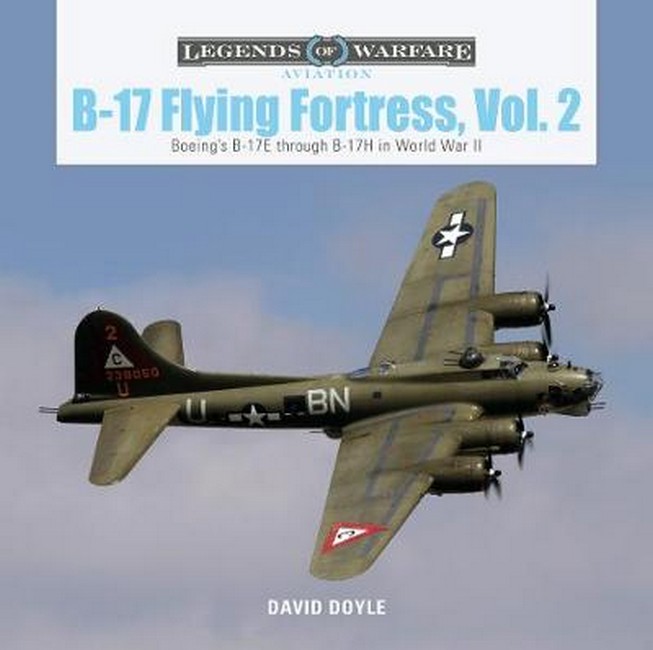 Boeing's B-17E through B-17H in World War II by Doyle, David Code: 60299 Format: Hardback / 128 pages Publication date: 01/05/2021 Availability: Future Publication. Pre-order now. Due date: May 2021 Price: AU $29.99
The Boeing B-17 Flying Fortress is one of the most iconic aircraft in aviation history. Through a broad range of photos gathered from around the world, this book - the second of two volumes - chronicles the design, development, and wartime use of the late models of the Flying Fortress, from the first truly combat-capable model, the B-17E, to the lifesaving B-17H. These B-17 versions featured the so-called "large" tail and were famously used in the devastating strategic-bombing campaign against Germany. As a special feature, detailed coverage of the famed "Memphis Belle" is included. The story of these iconic WWII aircraft is told through carefully researched photos, many of which have never before been published and are reproduced in remarkable clarity. Large, clear photos, coupled with descriptive and informative captions, unlock the secrets of this aircraft. AUTHOR: The aircraft books by David Doyle, author of over 125 books, are noted for their thorough coverage of historic warplanes and his celebrated ability to locate scarce vintage imagery. SELLING POINTS: Chronicles the design, development, and wartime use of the late-war models of the B-17 Illustrates the evolution of the aircraft from the B-17E to the B-17H, including the rare XB-38 and YB-40 models Profusely illustrated with rare archival photographs, including previously unpublished images 211 colour and b/w photographs
Format: Hardback
Pages: 128
Illustration: COLOUR SECTION(S)
Availability: Future Publication. Pre-order now. Due date: May 2021
Publisher: SCHIFFER PUBLISHING LTD
Publication date: 01/05/2021
Country of publication: UNITED STATES
Weight: 0 g
Dimensions: 229mm X 229mm
Code: 60299