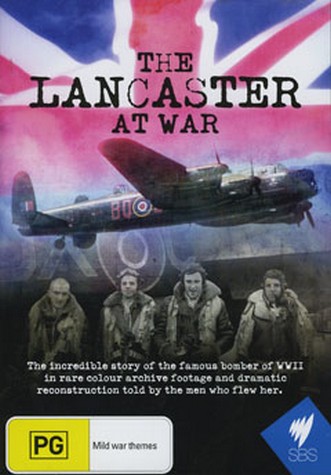 Code: 23382 Format: DVD / 50 mins Publication date: 01/07/2009 Availability: In stock at supplier. Usually dispatched 7-15 business days Price: AU $34.95
Producer's notes: The Lancaster at War is a vivid account of the aircraft that became the mainstay of Britain's Bomber Command in the struggle to defeat Nazi Germany. Described as the outstanding heavy bomber of World War II, the Avro Lancaster played a major role in the long and savage bombing campaign to cripple Hitler's Third Reich. Archive film, some of it unseen in colour, along with material specially shot for this production, graphically illustrate the capabilities of this remarkable aircraft, its development and its war-time missions. The Lancaster At War describes the aircraft that played a major role in the defeat of the Nazi regime and the courage and determination of Bomber Command aircrew that fought a grim battle in hostile skies, a struggle that can only be understood by confronting the reality of total war:
Format: DVD
Availability: In stock at supplier. Usually dispatched 7-15 business days
Publisher: MADMAN ENTERTAINMENT
Publication date: 01/07/2009
Country of publication: AUSTRALIA
Weight: 86 g
Dimensions: 0.00mm X 0.00mm
Code: 23382