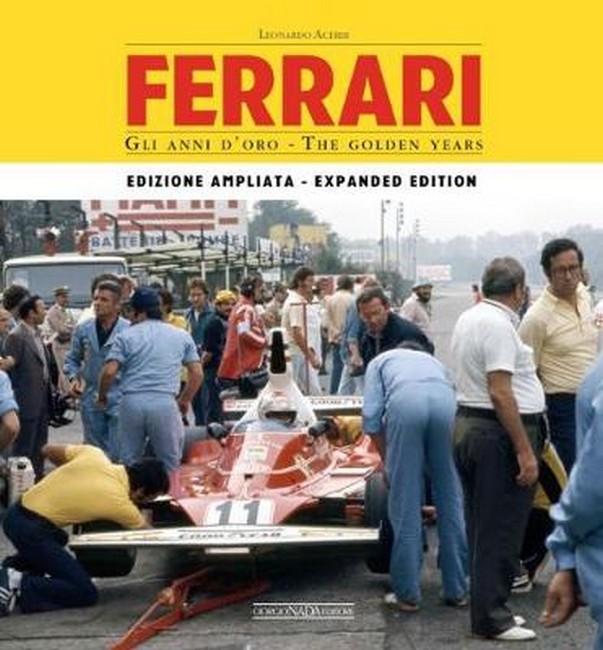 Enlarged edition by Acerbi, Leonardo Code: 55027 Format: Hardback / 400 pages Publication date: 08/07/2020 Availability: Future Publication. Pre-order now. Due date: July 2020 Price: AU $152.78
Ferrari's sporting history, from the origins to 1988, the year of Enzo Ferrari's death, narrated in 400 pages and more than 700 photos, most of which previously unpublished and drawn from the publisher's own archive. More than a book, this is a unique and prestigious document that reviews year by year, from 1947 to 1988, the true sporting epic of Ferrari's Ferrari. Page by page, we find champions of the calibre of Tazio Nuvolari, Alberto Ascari, John Surtees, Niki Lauda, Gilles Villeneuve and many others, who in Formula 1 and elsewhere won world titles at the wheel of unforgettable cars such as the 500 F2, the 158 F1, the Testa Rossa, the 250 GTO, the 330 P4 and the successful 312 T family, from the 1950s through to the late 1980s. This new enlarged edition includes not only champion drivers, but also the men and the mechanics who lived in close contact with the "Drake". They are described in specific text boxes: from Romolo Tavoni to Mauro Forghieri, from Franco Gozzi to Marco Piccinini, from Ermanno Cuoghi to Giulio Borsari. All accompanied by contextual texts by Leonardo Acerbi, a Ferrari historian of great experience. The book contains a unique collection of images, many in black and white but also a series of very rare colour shots, the majority by Franco Villani, a great reporter long associated with the Prancing Horse. An album allowing us to relive one of the greatest sporting stories of all time.
Format: Hardback
Pages: 400
Illustration: COLOUR SECTION(S)
Availability: Future Publication. Pre-order now. Due date: July 2020
Publisher: GIORGIO NADA EDITORE
Publication date: 08/07/2020
Country of publication: ITALY
Weight: 0 g
Dimensions: 300mm X 280mm
Code: 55027

In the aftermath of World War II, the United States accelerated the development of technologies that would give it an advantage over the Soviet Union. Airpower, combined with nuclear weapons, offered a formidable check on Soviet aggression. In 1947, the United States Air Force was established. Meanwhile, scientists and engineers were pioneering a revolutionary new type of aircraft which could do what no other machine had ever done: reach mach 1—a speed faster than the movement of sound—which pilots called "the demon."