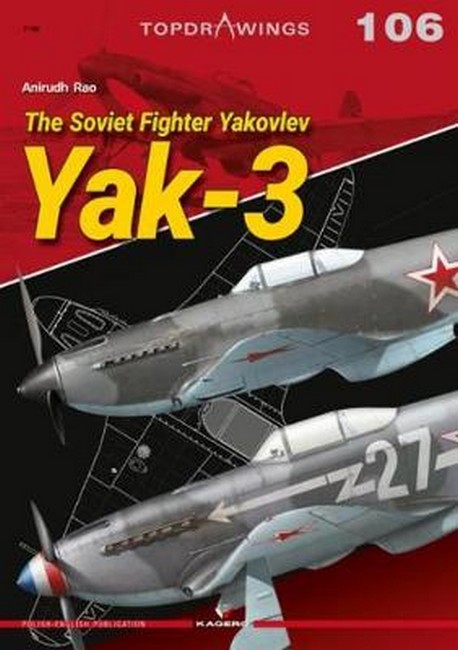 TopDraWings by Rao, Anirudh Code: 60168 Format: Paperback / 20 pages Publication date: 31/01/2021 Availability: Available. Usually dispatched from UK 1-2 business days Price: AU $39.99
Yakovlev Yak-3 is considered one of the best World War 2 fighters, invariably praised by those who flew it in combat for its remarkable performance. The Germans also treated it with respect, which is perhaps best illustrated by Generalleutnant Walter Schwabedissen's remark: The Yak-3 was a tough nut to crack for our pilots. It outperformed our machines in speed, maneuverability and rate of climb. The emergence of the Yak-3 was a compromise between the need to improve the Yak-1's characteristics, and the limitations of Soviet aircraft industry with its outdated technologies. The basic design concept took those shortcomings into account, which allowed a rapid launch of mass production of this inexpensive fighter. This in turn provided frontline units with timely deliveries of new equipment to recoup combat losses. The key to Yak-3's success was not due to the use of a new powerplant (in those days hard to come by in the USSR), but rather the superior performance of the M-105PF engine, which resulted in a five percent increase in power output. In combination with some serious weight shedding, the Yak-3 had a significantly better performance than the Yak-1. At altitudes up to 5,000m (which is where most of the air combat over Eastern Front took place), Yak-3 outperformed both the Bf-109 and Fw-190 in rate of climb and maneuverability. Unlike the Yak-1, the new fighter could also stay with the enemy in a dive. drawing sheets, colour profiles
Format: Paperback
Pages: 20
Illustration: B&W THROUGHOUT
Availability: Available. Usually dispatched from UK 1-2 business days
Publisher: KAGERO OFICYNA WYDAWNICZA
Publication date: 31/01/2021
Country of publication: UNITED STATES
Weight: 0 g
Dimensions: 297mm X 210mm
Code: 60168