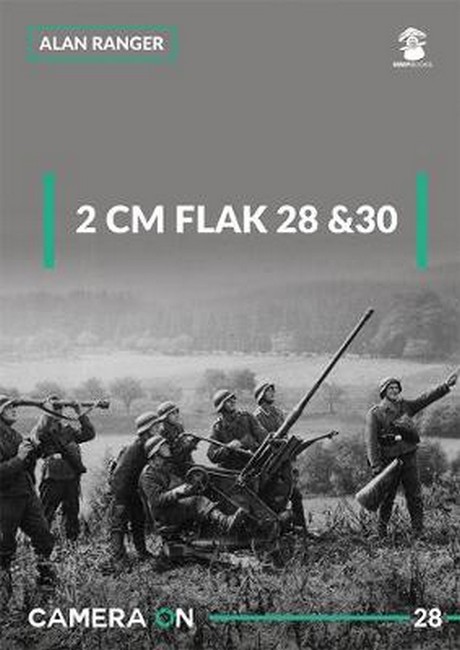 Camera On by Ranger, Alan Code: 60314 Format: Paperback / 80 pages Publication date: 28/06/2022 Availability: Pre Order. Release date: June 2022 Price: AU $34.95
This latest photo album in the 'Camera On' series covers in photographic detail the German usage of both the 20mm Flak 28 and the Flak 30 ant-aircraft guns. Both these weapons saw extensive action on all battle fronts of the second world war wherever the German armed forces saw service and whilst they were both excellent weapons at their time of development they both became less effective as ever faster and higher flying aircraft were produced by Germany's enemies. The book contains over 140 photographs taken by ordinary German soldiers of both the 20mm Flak 28 and 30 as well as their crews whilst in service and many of the environments within which they had to operate. It illustrates these weapons as the soldiers themselves viewed them in both their fighting environment and in many cases just as a tool they lived with and had to look after on a daily basis, not the highly polished and sanitized views of the official photographers. This is an invaluable reference for military historians and modellers alike.
Format: Paperback
Pages: 80
Illustration: B&W THROUGHOUT
Availability: Pre Order. Release date: June 2022
Publisher: MUSHROOM MODEL PUBLISHING
Publication date: 28/06/2022
Country of publication: POLAND
Weight: 0 g
Dimensions: 297.00mm X 210.00mm
Code: 60314