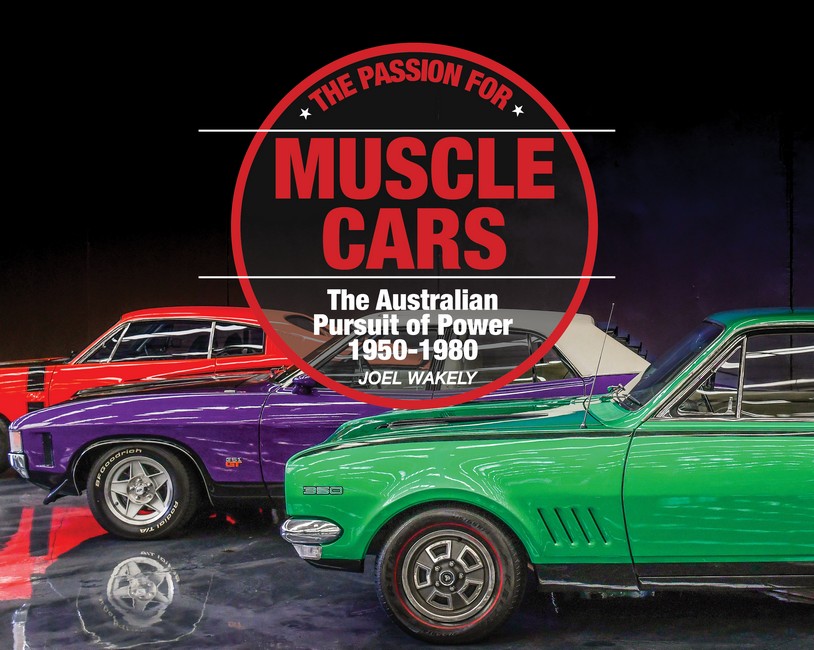 The Passion for Muscle Cars

Following the success of his bestselling book, the Passion for Holden, Joel Wakely takes a personal look at the golden age of Australian car manufacturing and particularly the passion for the muscle cars that arose in the 1950s and reached its height in the 1970s.

Joel looks at the main three manufacturers – Holden, Ford and Chrysler – and the cars they developed for an ever-hungrier market. He examines the racing scene at the time and how the three big manufacturers jostled for position both on the track and in the showrooms of Australia. This eclectic mix of exclusive photography, technical detail, fascinating history and the sheer passion for his subject shows Joel at his best; one moment extolling the merits of a specific muscle car, the next sharing recollections of his racing days at tracks that can now only shimmer and roar in the memory.

Joel Wakely was born in Crookwell NSW, where he spent his early childhood years. He moved to Sydney with his parents in 1948 and was educated at Newington College, Stanmore. After school he completed his National Service and CMF duties as a corporal in the Army Transport Corps, an experience that was to have a critical bearing on his career.

Joel’s motor sport obsession started in 1954, driving a MG-TC at Mount Druitt with the North Shore Sporting Car Club. He later became the owner of an iconic 48-215 Holden, which he raced in the Appendix-J class to great success throughout the early 1960s. He later worked with winning teams at many international and championship motor racing events, acquiring a knowledge and experience that has never left him.

After his involvement in racing, he continued in the motoring industry, firstly in 1969 working for the Bob Jane Tyre Corporation. As NSW/Queensland Sales Manager, he was involved in the commencement and development of the Bob Jane T-Mart system. Seven years later, Joel started a 30-year career in the car rental industry in increasingly senior management positions.

Joel’s passion for cars led him to start another new business: Avant-Garde Detailing, specialising in the restoration and detailing of prestige and unique vehicles. Clients included Trivet Classic, York Motors, Bonhams & Goodman and Cromwell’s; the latter an auctioneering house which provided a collection of fine motor cars for the company’s attention.

Extremely respected and known in Australian motoring circles, he still travels around the country talking to car clubs and enthusiasts, imparting his knowledge and passion. His first book, Legends of the 48-215, centred on his personal involvement with many drivers of this early model Holden. His second book, the bestselling The Passion for Holden, is a celebration of Australia’s much-loved marque, seen through the eyes of many of its most ardent fans. Now with this third book he covers one of the most exciting times in Australian Motor sport – the era of the muscle cars.