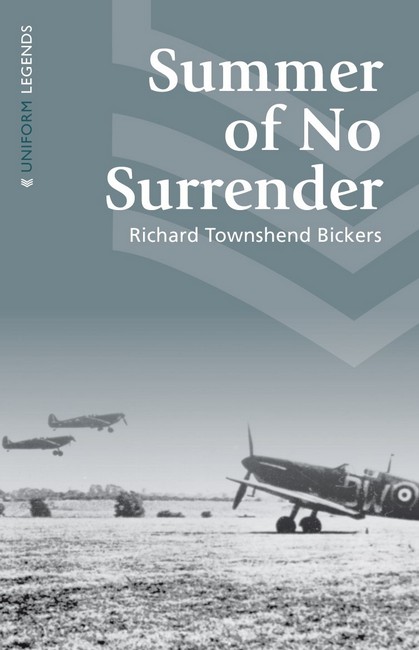 Summer of No Surrender

by Bickers, Richard Townshend Code: 49126 Format: Paperback / 220 pages Publication date: 15/09/2015 Availability: In Stock. Usually dispatched same business day from Sydney, Australia Price: AU $34.99
Summer of No Surrender The Battle of Britain...the testing time for the pilots of the R.A.F. - and the Luftwaffe. In the skies over the Channel, young men were proving their courage to the enemy, to their comrades, and to themselves...Flying Officer Peter Knight and Lieutenant Erich Hafner had begun to recognise the markings of each others aircraft.They had clashed in so many dogfights that now both men waited to catch a glimpse of the others plane:each sought out and stalked his special enemy. And their final deadly dogfight, when it came, shattered the whole of 172 Squadron..." An action-packed war thriller pitting one mans personal mission against the fate of the Battle of Britain from the most prolific of military aviation authors. Written by one of the foremost military aviation authors who was an RAF Officer himself and has interviewed dozens of Allied and Enemy pilots and ground crew.
Format: Paperback
Pages: 220
Illustration: B&W THROUGHOUT
Availability: In Stock. Usually dispatched same business day from Sydney, Australia
Publisher: UNICORN PRESS
Publication date: 15/09/2015
Country of publication: UNITED KINGDOM
Weight: 240 g
Dimensions: 198.00mm X 129.00mm
Code: 49126