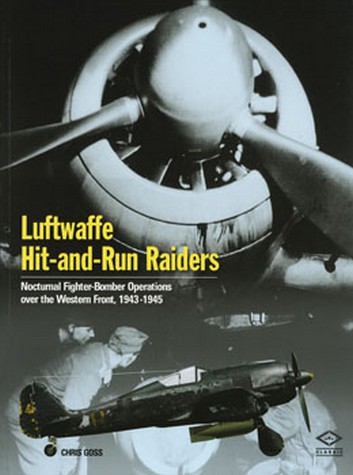 by Chris Goss Code: 22142 Format: Paperback / 96 pages Publication date: 01/07/2009 Availability: Sold Out Price: AU $49.95
Publisher's Notes: In 1940 the Luftwaffe fitted bombs to their Messerschmitt 109s and Messerschmitt 110s, thus creating the Jagdbomber or Jabo. Jabos played a key role in the Battle of Britain, but then appeared to be forgotten until early 1942 when two fighter Staffeln were formed on the Western Front and carried out deadly lightning low-level hit and run attacks in southern Britain. Despite the relative successes of these two units, they were combined and re-designated Schenellkampfgeschwader 10 or SKG 10 in the spring of 1943. The Luftwaffe later decided to commit these warplanes to risky night operations, but the first such mission on 16 April 1943 sadly ended in tragedy. In 1944 they were redesigned and eventually named Nachtschlachtgruppe 20, and despite shortages of aircraft and pilots, they continued to fly on crucial missions such as against the Remagen Bridge and Allied motor transport columns until the end of the war. With many rare and previously unpublished photographs of both the crews and aircraft, this impressive book tells the story of the famous nocturnal Jabo attacks carried out by I/SKG 10 and its subsequent designations. Fully illustrated throughout, it draws upon genuine Allied combat reports, Luftwaffe mission reports and the expert post war analysis carried out by its highly decorated commander, Major Kurt Dahlmann. This masterful study belongs in the library of every serious military historian and modeller.
Format: Paperback
Pages: 96
Availability: Sold Out
Publisher: IAN ALLAN PUBLISHING
Publication date: 01/07/2009
Country of publication: UNITED KINGDOM
Weight: 462 g
Dimensions: 303mm X 226mm
Code: 22142