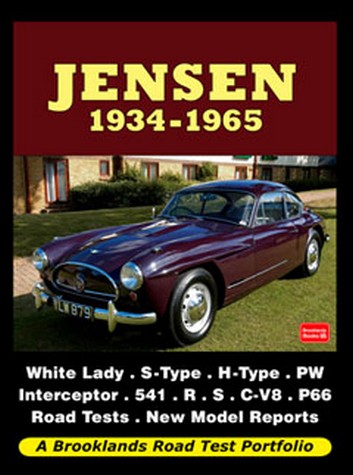 by Brooklands Books Code: 23826 Format: Paperback / 160 pages Publication date: 01/07/2010 Availability: Available. Usually dispatched 1-2 business days Price: AU $39.95
Publisher's Notes: Jensen began as a small coachbuilding firm run by brothers Richard and Alan Jensen; they bought out the body works of W.J. Smiths & Sons where they worked after the owner's death and renamed it Jensen Motors in 1934. They built exclusive customised bodies for standard cars produced by several manufacturers of the day including Morris, Singer, Standard and Wolseley. They also started to design their first true production car under the name White Lady. This evolved into the Jensen S-type which went into production in 1935 until 1941 as both a saloon and a convertible. The car was built on a steel chassis and used aluminium for the body panels. The car was sold with either a 2,227cc SV 8 motor or a 3,622cc SV 8 motor, both built by Ford. In total, there were about 50 S-type cars built. The Jensen H-type is a saloon car built from 1938 through 1945. The car was built on a strengthened Ford chassis and used aluminum for the body panels. The car was sold with a 4,279cc OHV Inline 8 built by Nash. However, there was at least 1 H-type that was fitted with a V12 from the Lincoln Zephyr. In total, there were 15 complete examples of the H-type to leave the factory. The Jensen PW is a saloon car built from 1946 through 1952. The PW stood for Post-War, as the car was the first model built by Jensen after the Second World War. A convertible model was also built alongside the hardtop saloon. The first models utilized the Meadows 3.9L Straight 8 motor. However, issues arising from harsh vibrations while driving eventually led Jensen engineers to switch to better established Nash 4.0L straight 6 engines from the Austin Sheerline. In total, there were less than 20 examples built. The first generation of Jensen Interceptor was produced from 1950 to 1957. The car was based around Austin components with a body built by Jensen and styled by Eric Neale. The engine and transmission came from the Austin Sheerline and the chassis was a lengthened version of the one used on the Austin A70 with a modified version of the independent coil sprung suspension. The two door body was available at first as a convertible and made from a mix of aluminium and steel on a wood frame. The entire front section hinged forwards to give access to the engine. The wrap around rear window was made of rigid plastic (Perspex) and was arranged to drop down into a well for stowage when the top was lowered. In 1952 a hardtop version with fabric covered roof was launched and a few sedanca versions were also made. Total production was 32 convertibles, 52 saloons and 4 sedancas. The Jensen 541 was first exhibited at the London Motor Show in October 1953, production started in 1954. The 541 used fibreglass bodywork mounted on a steel chassis and was fitted with a six cylinder, three SU carburettor version of the 4 litre Austin engine and four speed transmission with optional Laycock de Normanville overdrive. The body consisted of three major mouldings and the entire front was rear hinged and could be raised for engine access. The doors were aluminium. It was also a luxurious car with the well equipped interior featuring leather seats as standard. By employing light weight materials, Jensen managed to make the car significantly lighter than its contemporary Interceptor model, with a dry weight of 1,220 kg. In 1957 the 541 R was introduced, and in 1960 the 541 S arrived with wider bodywork and revised grill styling. Production of the Jensen 541 ended in 1959 and the 541 S early 1963 when the range was replaced by the C-V8. The Jensen C-V8 was launched in October 1962, it was the successor to the similarly styled 541 series and shared their use of fibreglass as a body material (only the door skins were metal). The C-V8 used big block Chrysler engines, at first the 361 and from 1964 the 383 in which produced 330 bhp. Being able to achieve a top speed of 136 mph, run the quarter mile in 14.6 seconds and 0-60 mph in 6.7 seconds made this automobile one of the fastest production four seaters at the time. The styling was done by the factory, and was ...controversial. It was decidedly unusual and the slant eyed look either repelled or attracted people with little middle ground. This perhaps contributed to the relatively small total production from 1962 to 1966 of 500 cars. The car was upgraded to Mk II specification in 1963 with Selectaride dampers fitted to the rear. The 1965 Mk III had both pairs of front headlights made the same size and a dual circuit braking system. This portfolio reports on the next 30 years covering the S & H types, PW, early Interceptors, the 541, 541 R & S, C-V8 & P66. Included are road & comparison tests, new model reports, performance data & an informative buying guide.
Format: Paperback
Pages: 160
Availability: Available. Usually dispatched 1-2 business days
Publisher: BROOKLANDS
Publication date: 01/07/2010
Country of publication: UNITED KINGDOM
Weight: 492 g
Dimensions: 280mm X 210mm
Code: 23826