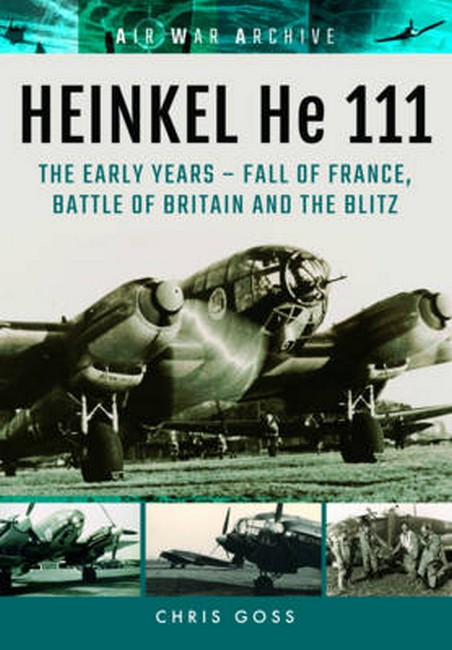 The Early Years - Fall of France, Battle of Britain and the Blitz by Goss, Chris Code: 40460 Format: Paperback / 128 pages Publication date: 30/05/2016 Availability: Available. Usually dispatched 1-2 business days Price: AU $44.99
Considered to be the best known German bomber of the Second Wold War, the Heinkel He 111 served in every military front in the European theatre, having first being deployed in the Spanish Civil War in 1936. It then saw extensive service in the invasion of Poland, the Norweigan campaign and the invasion of the Low Countries and France in 1940. When the Luftwaffe was tasked with destroying Britain's ability to resist invasion in 1940, the He 111 formed almost half of the Gruppen employed by Luftflotte 2 and Luftflotte 3. When the Luftwaffe switched to attacking cities and industrial sites the Heinkel 111 was widely employed, with raids against targets such as London, Coventry, Bristol, Birmingham and Liverpool. In this selection of unrivalled images collected over many years, the operations of this famous aircraft in the early years of the war - particularly the invasion of Poland, the Blitzkrieg in the West, the Battle of Britain and the very early stages of the Blitz - are portrayed and brought to life.
Format: Paperback
Pages: 128
Illustration: B&W THROUGHOUT
Availability: Available. Usually dispatched 1-2 business days
Publisher: FRONTLINE BOOKS
Publication date: 30/05/2016
Country of publication: UNITED KINGDOM
Weight: 0 g
Dimensions: 246mm X 189mm
Code: 40460