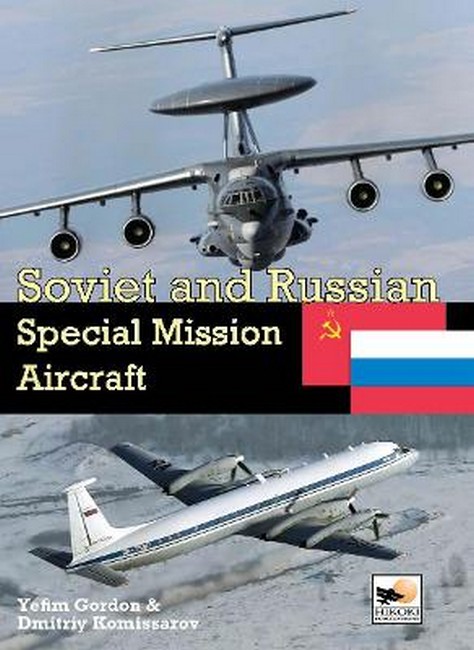 In the years after the Second World War, aircraft optimised for various kinds of special missions began assuming ever-greater importance in the inventories of the worlds leading air forces. The Soviet Union was no exception - numerous special mission versions of Soviet military fixed-wing aircraft and helicopters were developed and fielded, and the process is continuing in modern Russia. Some of them have seen action in various armed conflicts, including the Afghan War, the Chechen Wars and, most recently, the Syrian War. The need to control friendly forces on the move and manage airborne air defence assets efficiently resulted in the development of airborne early warning and control (AEW&C) aircraft. The first of these in the Soviet inventory was the early 1960s vintage Tupolev Tu-126 which was replaced in the 1980s by the Ilyushin/Beriyev A-50. The latter has been constantly upgraded but is now due for replacement by the latest A-100. An equally important role is filled by airborne command posts - mostly based on airliners, including the Ilyushin Il-22 army-level ABCP, the Tu-214PU and the Il-80 national emergency airborne command post (the Russian equivalent of the Boeing E-4 doomsday aircraft). The latter may be replaced by a specialised derivative of the Il-96-400 airliner. Rotary-wing aircraft in this class were also developed, such as the Mil Mi-8VzPU and Mi-6VKP/Mi-22. Another important class is reconnaissance aircraft of various categories - photo reconnaissance, electronic intelligence, nuclear/biological/chemical reconnaissance, radiation intelligence (RINT). These were represented by ELINT versions of bombers (including the Tu-22 and Tu-22M), airliners and transports (ELINT versions of the Antonov An-12 and An-26 transports, the Il-20 derivative of the Il-18 airliner), RINT versions of the An-12 and the An-24 airliner etc. A separate chapter covers electronic countermeasures aircraft, such as specialised versions of the Tu-16 and Tu-22 bombers and An-12 transport, the latest Il-22PP, the Army Aviations many ECM versions of the Mi-8 helicopter (including the latest Mi-8MTPR) and the heavy Mi-10PP. A singularly important class is in-flight refuelling tankers supporting the operations of both heavy aircraft (notably strategic bombers) and tactical jets. These include tanker versions of the Tupolev Tu-16 and Myasishchev M-4/3MS series bombers and the Il-78, including the latest Il-78M-90. Another category which assumed considerable importance is search and rescue aircraft, such as the naval An-12PS equipped to carry a paradroppable lifeboat and the latest Beriyev Be-200PS amphibian able to pick up survivors at the scene of a maritime disaster. The book is illustrated with numerous previously unpublished photos, line drawings and many colour side views.

Yefim Gordon was born in 1950 in Vilnius, Lithuania, and graduated from the Kaunas Polytechnical Institute in 1972 as an engineer/electronics designer. He has been a resident of Moscow since 1973, when, as a hobby, he started collecting photographs and books on the history of Soviet aviation. This has now developed into a major archive. Since the 1980s he has been a professional aviation journalist and writer, with over 80 books published on Soviet/Russian aviation in Russian, English, Polish and Czech, as well as close to 120 magazine features and photo reports. He is also an accomplished photographer, with countless photos published in the western press; the current edition of Janes All the Worlds Aircraft features more than 50 of his photographs.