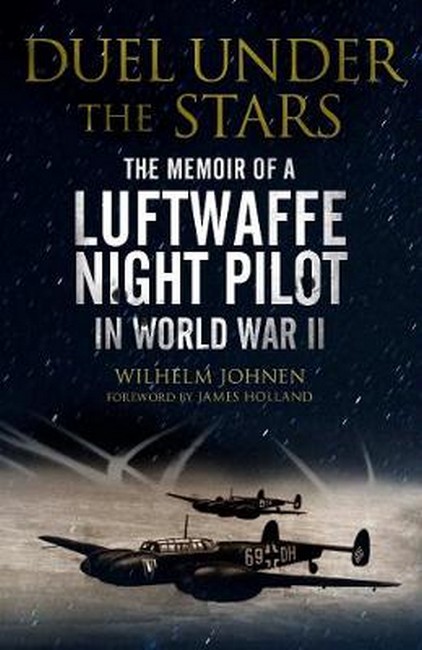 Duel Under the Stars

The Memoir of a Luftwaffe Night Pilot in World War II by Johnen, Wilhelm Code: 59229 Format: Paperback / 320 pages Publication date: 03/07/2020 Availability: Future Publication. Pre-order now. Due date: July 2020 Price: AU $29.99
"The enemy bomber grew larger in my sights and the rear gunner was sprayed by my guns just as he opened fire. The rest was merely a matter of seconds. The bomber fell like a stone out of the sky and exploded on the ground. The nightmare came to an end." In this enthralling memoir, the author recounts his experiences of the war years and traces the story of the ace fighter pilots from the German development of radar to the Battle of Britain. Johnen flew his first operational mission in July 1941, having completed his blind-flying training. In his first couple of years he brought down two enemy planes. The tally went up rapidly once the air war was escalated in spring 1943, when Air Marshal Arthur Harris of the RAF Bomber Command began the campaign dubbed the Battle of the Ruhr. During this phrase of the war Johnen's successes were achieved against a 710-strong force of bombers. Johnen's further successes during Harris's subsequent Berlin offensive led to his promotion as Staffelkapitan (squadron leader) of Nachtjagdgeschwader and a move to Mainz. During a sortie from there, his Bf 110 was hit by return fire and he was forced to land in Switzerland. He and his crew were interned by the authorities. The Germans were deeply worried about leaving a sophisticatedly equipped night fighter and its important air crew in the hands of a foreign government, even if it was a neutral one. After negotiations involving G ring, the prisoners were released. Johnen's unit moved to Hungary and by October 1944 his score was standing at 33 aerial kills. His final one came in March the following year, once Johnen had moved back to Germany. AUTHOR: Johnen enlisted in Luftwaffe in 1939 and in 1941 he joined the German night fighter force (Nachtjagd) and participated in the Defence of the Reich campaign. He became a night fighter ace in June 1943 after achieving his fifth victory. In April 1944 Johnen was briefly interned in Switzerland when he force-landed in the country. It caused an international incident but he was repatriated with his crew some days later. Johnen was awarded the Knight's Cross of the Iron Cross in October 1944 for the destruction of 33 RAF bombers. He ended the war with 34 aerial night victories. After the war he worked for Willi Messerschmitt and started his own company. He died in 2002. James Holland is a historian, writer, and broadcaster. The author of the best-selling Fortress Malta, Battle of Britain, and Dam Busters, he has also written nine works of historical fiction. He regularly appears on television and radio, and has written and presented the BAFTA-shortlisted documentaries, Battle of Britain and Dam Busters for the BBC. 128 b/w illustrations
Format: Paperback
Pages: 320
Illustration: B&W THROUGHOUT
Availability: Future Publication. Pre-order now. Due date: July 2020
Publisher:
Publication date: 03/07/2020
Country of publication: UNITED KINGDOM
Weight: 0 g
Dimensions: 198mm X 129mm
Code: 59229