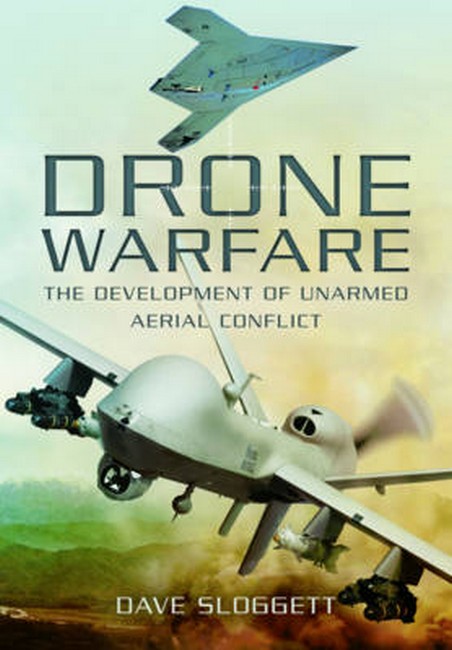 The Development of Unmanned Aerial Conflict by Sloggett, Dave Code: 38669 Format: Hardback / 256 pages Publication date: 07/04/2014 Availability: Available. Usually dispatched 1-2 business days Price: AU $65.00
The Development of Unmanned Aerial Conflict will examine the development and use of aerial drones, a topical subject that has not been written on to date. An unmanned aerial vehicle, commonly known as a drone, is an aircraft without a human pilot on board. Its flight is either controlled autonomously by computers in the vehicle, or under the remote control of a navigator or pilot on the ground or in another vehicle. Blending history with current and recent operations, Dr Sloggett will set out to put the record straight. In some quarters of the press drones get a bad press and there has been much controversy over their deployment, some of which is not deserved. The book reveals the history of unmanned aircraft, their recent development and why they have emerged onto the scene. Why did the US, for example, really invest highly in drone technology? When did all that start? What barriers had to be overcome? What was there before drones arrived? The book also analyses their operations in Iraq in Gulf War Two and more recently Afghanistan. What roles did drones play? Where they successful? What new developments emerged during operations? Did they save lives? Further to this is a detailed look at case studies where they have been used trying to remove some of the incorrect reporting - putting the record straight based on evidence. How many have been shot down and where? The book then looks at strategic uses of drones at present: Iran is being monitored; they are already in action over parts of Africa; what are other countries doing - China, Iran? Turkey? The RAF's use of drones, their deployment and operations is considered along with important questions such as where this goes for the future. What are the issues? Will all air forces be drone based in the future? What other applications may arise in the civilian market?
Format: Hardback
Pages: 256
Illustration: B&W THROUGHOUT
Availability: Available. Usually dispatched 1-2 business days
Publisher:
Publication date: 07/04/2014
Country of publication: UNITED KINGDOM
Weight: 560 g
Dimensions: 234.00mm X 156.00mm
Code: 38669