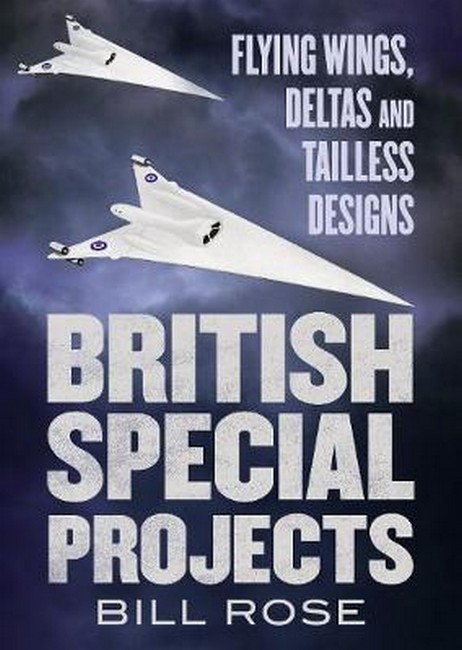 Flying Wings, Deltas and Tailless Designs by Rose, Bill Code: 60420 Format: Hardback / 288 pages Publication date: 12/11/2020 Availability: Available. Usually dispatched from UK 1-2 business days Price: AU $78.99
This book takes a carefully considered look at the history of many lesser known but nevertheless advanced British flying wing, delta and tailless aircraft that stretch across much of the last century. The emphasis is on classified projects considered for research or military purposes, but also includes those aircraft that were built, flown and entered service. The first commercially successful British flying wing biplane was designed by John Dunne and undertook limited military duties during the First World War. Soon, the early flying wing designs gave way to sleeker boomerangs that looked impressive, but often suffered with aerodynamic shortcomings. These were followed by the arrival of advanced wartime German jet powered delta projects initiated by Dr Alexander Lippisch. They were massively influential, with most post-war scientists and engineers immediately recognised the potential for a new generation of high performance warplanes. By the late 1940s, the UK required advanced jet powered bombers capable of carrying atomic bombs over long distances. This created many unusual, often German influenced designs that finally resulted in the V-Bombers. They were followed by short lived concepts for even larger aircraft that were not only capable of delivering nuclear weapons, but powered by nuclear propulsion. At the same time, interest in variable geometry wings gathered momentum, leading to the supersonic Swallow with its impressive science-fiction appearance. Sadly this Barnes Wallace concept was too far ahead of its time to overcome a number of technical issues, but the influence on American combat aircraft was considerable. The British also pushed ahead with ideas for vertical take-off fighters and the delta wing was often the first choice for many proposals. By the 1960s, Britain was attempting to gain a foothold in the space race. Plans were drawn up for rocket launching sites within the UK and the development of exotic delta winged space fighters. The ideas were impressive, although the technology was well beyond the UK's ability to fund and develop. These were glorious times for British aircraft designers who often pushed their ideas to the boundaries of what was possible, with design studies that remain influential today.
Format: Hardback
Pages: 288
Illustration: B&W THROUGHOUT
Availability: Available. Usually dispatched from UK 1-2 business days
Publisher: FONTHILL
Publication date: 12/11/2020
Country of publication: UNITED KINGDOM
Weight: 870 g
Dimensions: 248mm X 172mm
Code: 60420