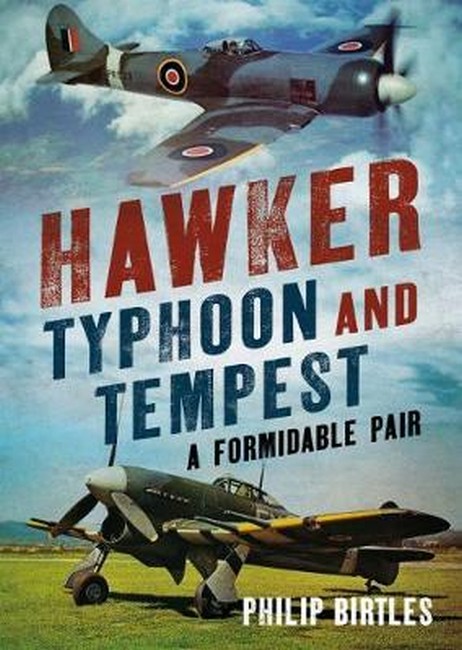 A Formidable Pair by Birtles, Philip Code: 52451 Format: Hardback / 288 pages Publication date: 24/10/2018 Availability: In Stock. Usually dispatched same business day from Sydney, Australia Price: AU $47.99 (was AU $79.99) You save AU $32.00
With the technology of the Hurricane being at the end of the biplane combat aircraft era, there was an urgent requirement for a modern fighter with a capability ahead of the anticipated German fighter development for the Luftwaffe. The Hawker design team lead by Sydney Camm created the all-metal stressed skin structure Typhoon powered by the revolutionary Napier Sabre engine. Whereas the Hurricane had been developed in peacetime, the Typhoon was designed in wartime, when the urgency of the programme caused the development of both the airframe and engine to be accelerated, resulting in teething troubles not being fully solved when the aircraft entered service with the RAF. The much improved Tempest used the same engine and basic fuselage with thinner lamina flow wings, giving improved performance at altitude, and allowing the destruction of the V1s at low altitude. Both aircraft made a significant impact on the victory by the Allies in WW2, although their low level ground attack missions were extremely hazardous, and resulted in high pilot losses.
Format: Hardback
Pages: 288
Illustration: B&W THROUGHOUT
Availability: In Stock. Usually dispatched same business day from Sydney, Australia
Publisher: FONTHILL
Publication date: 24/10/2018
Country of publication: UNITED KINGDOM
Weight: 874 g
Dimensions: 248mm X 172mm
Code: 52451