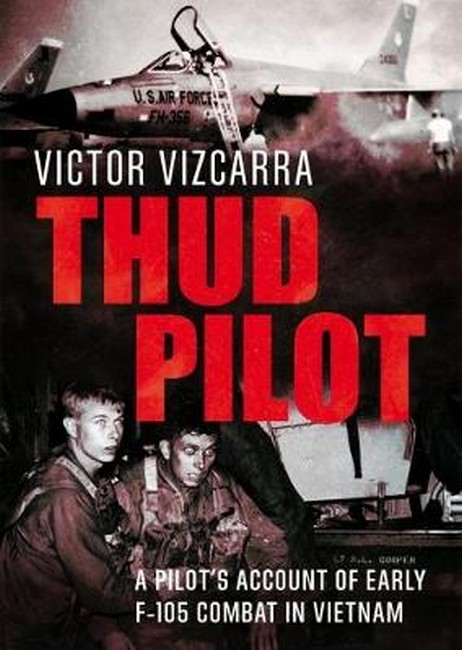 A Pilot's Account of Early F-105 Combat in Vietnam by Vizcarra, Victor Code: 49970 Format: Paperback / 160 pages Publication date: 17/06/2018 Availability: In Stock. Usually dispatched same business day from Sydney, Australia Price: AU $23.99 (was AU $39.99) You save AU $16.00
Thud Pilot is the personal account of a combat fighter pilot who flew the Air Force's premier fighter-bomber in the most dangerous skies over North Vietnam. In the first five years of the Vietnam War, the F-105 Thunderchief conducted 75 percent of the Air Force bombing missions over North Vietnam. Thud Pilot tells the story of the courageous men who flew the F-105 from its earliest combat deployment in 1964, and on through 1966, the year of its heaviest losses. The author's more significant missions, including his ejection and rescue over North Vietnam are described in detail and are accompanied by map drawings depicting the mission routes from take-off to refueling orbits, the target, and return. The book is full of several `firsts' in the expanding air war over North Vietnam, including `Operation Spring High,' the first counter Surface-to-Air-Missile (SAM) strike in the history of aerial warfare. The personal perspective from years of combat experience reveals just how the political mismanagement and inane Rules of Engagement made them as much the hunted as they were the hunters. Thud Pilot goes beyond the battle air space and shares the emotional impact on the families left behind.
Format: Paperback
Pages: 160
Illustration: B&W THROUGHOUT
Availability: In Stock. Usually dispatched same business day from Sydney, Australia
Publisher: FONTHILL
Publication date: 17/06/2018
Country of publication: UNITED KINGDOM
Weight: 358 g
Dimensions: 234mm X 156mm
Code: 49970