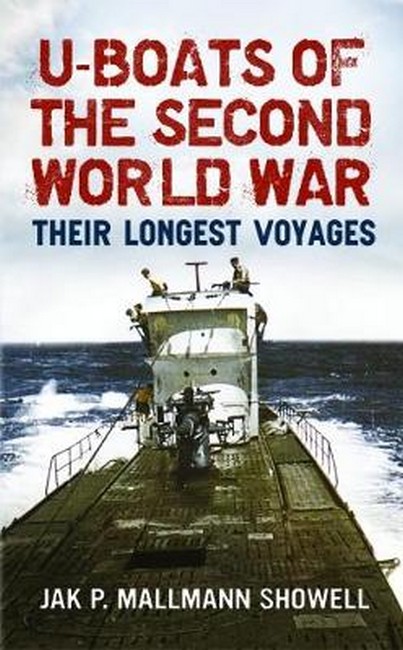 U Boats of the Second World War

Their Longest Voyages by Showell, Jak P. Mallmann Code: 50866 Format: Paperback / 240 pages Publication date: 13/12/2017 Availability: In Stock. Usually dispatched same business day from Sydney, Australia Price: AU $26.99 (was AU $44.99) You save AU $18.00
Ocean-going U-boats, each one not much longer than four European articulated lorries with up to sixty men inside them, sailed the far-off seas to reap havoc in hot inhospitable waters. The air forces and navies from Britain, the United States and other colonial countries followed to make this a daring and death-threatening venture. The facts of what the U-boats achieved against massive odds have been told before, but 'U-Boats of the Second World War: Their Longest Voyages' is different. It concentrates more on how it was done. How the men survived, how they lived and died and how they still found time to carry out their orders. The book is based on masses of previously unpublished documents from the German U-boat Museum, many of them written during or shortly after the war by men who survived this bitter conflict. This is the story of how specially built long-range ocean-going U-boats started out one step ahead of the Allied navies and air power, how they fell one step behind and how they finally vanished into the depths of the biggest and deepest oceans.This is a remarkable story of endurance, courage and comradeship that terrified the world for the most critical period of the Second World War. The author, Jak P. Mallmann Showell, is the son of a U-boat diesel mechanic who disappeared in those warm waters two months before the author was born.
Format: Paperback
Pages: 240
Illustration: B&W THROUGHOUT
Availability: In Stock. Usually dispatched same business day from Sydney, Australia
Publisher: FONTHILL
Publication date: 13/12/2017
Country of publication: UNITED KINGDOM
Weight: 610 g
Dimensions: 234mm X 156mm
Code: 50866