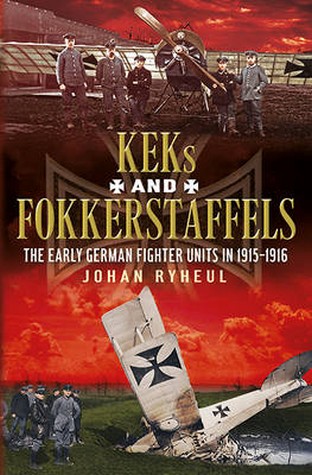 History of the German KEK and Fokkerstaffels

The Early German Fighter Units in 1915-1916 by Ryheul, Johan Code: 1781552231 Format: Hardback / 256 pages Publication date: 04/07/2013 Availability: In Stock. Usually dispatched same business day from Sydney, Australia Price: AU $41.99 (was AU $69.99) You save AU $28.00
This is the first time that the history of the German Kampfeinsitzer Kommandos, better known as KEKs and the Fokkerstaffels, have been gathered in a book. The KEKs were the predecessors of the famous Jagdstaffeln or Jastas which would wreak havoc on Allied aircraft over the trenches during the First World War. Aces such as Boelcke, Immelmann, Berthold, Buddecke, Goring, Udet, Frankl, Bernert, Veltjens, Student, von Althaus and Leffers were household names in Germany yet feared and revered by their Allied contemporaries. The KEKs are surrounded with mystery and even today, most of the locations of the airfields have long been forgotten. Remarkably, all airfields were located by the author and mapped in the History of the German KEK and Fokkerstaffels: The Early German Fighter Units in 1915-16. This book not only presents the history of these units and their aces, it also acts as a battlefield guide so the reader can explore these fascinating locations today. Illustrated with over 250 photographs and profiles of the various fighter aircraft they used in battle, this fascinating book takes a journey from Flanders to the Somme, to the Verdun to the Vosges. The author, a First World War One expert who has worked with the BBC and The History Channel, was aided by two battlefield photographers. On a number of occasions, they were able to discover the castles where the German aces slept, ate, celebrated victories and mourned fallen comrades. The book starts with the KEK Vaux, one of the most famous units, which had no less than eight aces who would receive Germany's highest reward for bravery: the Pour le Merite. It describes in exhaustive detail the lives of these early fighter pilots, their dogfights and encounters with death. To celebrate the anniversary of the First World War in 2014, this is a unique book with unpublished photographs of the period and of the aces.
Format: Hardback
Pages: 256
Illustration: B&W THROUGHOUT
Availability: In Stock. Usually dispatched same business day from Sydney, Australia
Publisher: FONTHILL
Publication date: 04/07/2013
Country of publication: UNITED KINGDOM
Weight: 680 g
Dimensions: 234mm X 156mm
Code: 1781552231

JOHAN R. RYHEUL was born in Bruges, Flanders, and has written various articles for local and international magazines on archaeological and First World War subjects. Ryheul has participated in First World War documentaries for the BBC and The History Channel. He has written nine books in Dutch about First World War aerial and naval warfare.