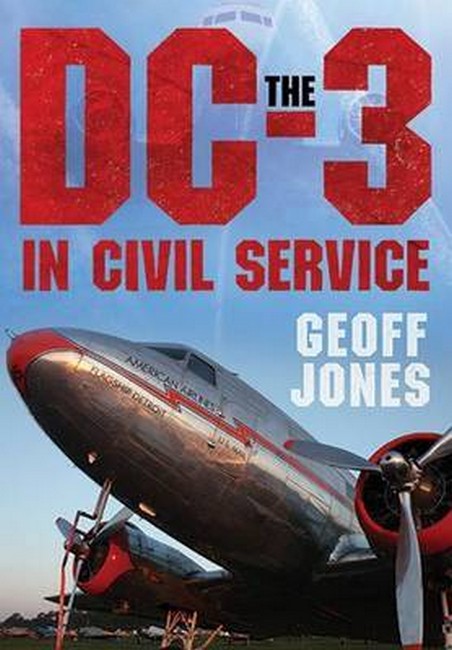 by Geoff Jones Code: 39746 Format: Hardback / 288 pages Publication date: 01/11/2014 Availability: In Stock. Usually dispatched same business day from Sydney, Australia Price: AU $55.00
Like the P-51 Mustang and Supermarine Spitfire, the Douglas DC-3 is an iconic aircraft design. It has endured more than any other with several hundred still in use worldwide in locations as far apart as Africa, Antarctica and the US. Many of the current operators use turbine conversions of the DC-3mainly using Basler, SAAF and Dodson International the main proponents.Just about every major post-war airline began their schedules with the DC-3. Many took advantage of post-war military surplus C-47s that had already written huge volumes of history with their roles with the US Army Air Corps in the Second World War such as the D-Day landings. Many enthusiast organisations still keep DC-3s airworthy and fly them for members. However, the days of DC-3 operations are now nearing an end thanks to spares unavailability, cost and the shortages of Avgas fuel in remote parts of the world.The Douglas DC-3 is to aviation what the Volkswagen and Ford were to motoring, and what the DC-3 operators started, the 21st century Airbus/Boeing operators continued thanks to the astonishing legacy of this remarkable aircraft.
Format: Hardback
Pages: 288
Availability: In Stock. Usually dispatched same business day from Sydney, Australia
Publisher: FONTHILL
Publication date: 01/11/2014
Country of publication: UNITED KINGDOM
Weight: 720 g
Dimensions: 275.00mm X 215.00mm
Code: 39746

Geoff Jones is a pilot, writer and photographer who grew up in the 1960s hearing the sounds of Cambrian Airways DC-3s thundering out of his local airport at Cardiff/Rhoose. This affection for the iconic DC-3 has been with him during a half-century of worldwide travel reporting and photographing many aspects of the world's civil aviation scene. With fourteen civil aviation book titles to his name and thousands of magazine articles, Jones is a respected and well-known author/photographer. Flying a DC-3 in the Caribbean was a career highlight.