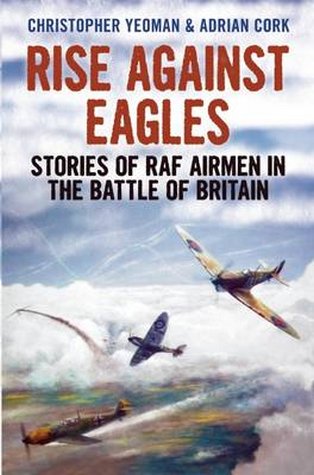 Stories of RAF Airmen in the Battle of Britain by Yeoman, Christopher Code: 1781550859 Format: Hardback / 232 pages Publication date: 15/11/2012 Availability: In Stock. Usually dispatched same business day from Sydney, Australia Price: AU $55.00
Rise Against Eagles is a collaborative work presenting exceptional tributes to an array of airmen from various nations who served in the Royal Air Force during critical battles of the Second World War. The story begins at the outbreak of war when Fairey Battle rear-gunner, Bobby Pearce, was sent to France with No.142 Squadron, as part of the British Expeditionary Force in an attempt to repel the inevitable German advance into France and the Low Countries. After a long, hard winter and aerial skirmishes with the Luftwaffe, the RAF was soon withdrawn in preparation for what would be one of the most decisive battles in British history, the Battle of Britain. The core focus of this work is concentrated on a selection of fighter pilots who fought during that long summer and autumn of 1940, when everything depended on the RAF achieving air superiority to prevent Hitler's planned invasion of Britain. This exceptional group of pilots are remembered for their evocative stories which are ripe with gripping combat experiences and gruelling sacrifice. Rise Against Eagles celebrates the legacy of these iconic airmen who risked and gave their lives in a tremendous effort to defend Britain against all odds.
Format: Hardback
Pages: 232
Illustration: B&W THROUGHOUT
Availability: In Stock. Usually dispatched same business day from Sydney, Australia
Publisher: FONTHILL
Publication date: 15/11/2012
Country of publication: UNITED KINGDOM
Weight: 580 g
Dimensions: 234.00mm X 156.00mm
Code: 1781550859