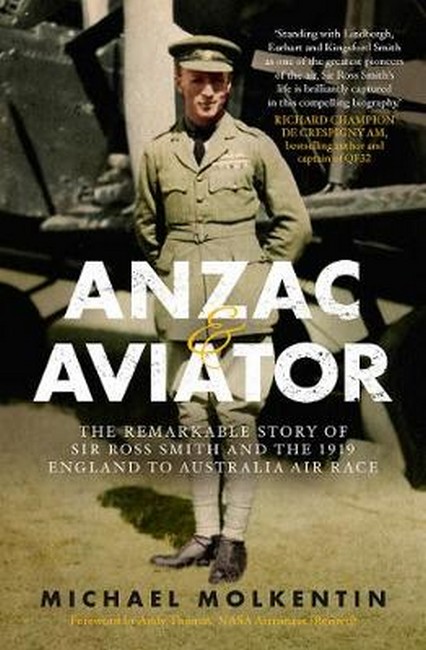 The Remarkable Story of Sir Ross Smith and the 1919 England to Australia by Molkentin, Michael Code: 58074 Format: Paperback / 424 pages Publication date: 01/10/2019 Availability: Available. Usually dispatched 1-3 business days Price: AU $32.99
'He was courageous. He was ambitious. He was skilled. He was visionary. He could be ruthless. He was someone born of a new nation. But he was of a time now long past. And yet in the language of a later generation it could be said he had the "right stuff" . . . Michael Molkentin captures [Ross Smith] brilliantly.' - Andy Thomas, NASA Astronaut (Retired) In the smouldering aftermath of the First World War a young Australian pilot and his crew prepare to attempt the inconceivable: a flight, halfway around the globe, from England to Australia. The 18,000 kilometre odyssey will take 28 days and test these men and their twin-engine biplane to the limit. It is a trans-continental feat that will change the world and bring the air age to Australia. It will also prove to be the culminating act in the extraordinary and tragically brief life of its commander, Captain Sir Ross Smith. Raised on a remote sheep station in the dying days of Australia's colonial frontier, there was little in Ross Smith's childhood that suggested a future as one of the world's great pioneering aviators. He went to war in 1914, serving with the light horse at Gallipoli and in the Sinai before volunteering for the fledgling Australian Flying Corps. In a new dimension of warfare, Ross Smith survived two gruelling years of aerial combat over Palestine to emerge as one of the most skilled and highly decorated Australian pilots of the war. In 1919 he was a pilot on the first ever mission to survey an air route from Cairo to the East Indies, before gaining international fame as the winner of the government's GBP10,000 prize for leading the first aircrew to fly from England to Australia. His attempt to exceed this by circumnavigating the world by air in 1922 would end in disaster. Drawing on the rich and extensive collection of Ross Smith's private papers, Anzac & Aviator tells, for the first time, the gripping story of a remarkable aviator, the extraordinary times in which he lived and the air race that changed the world. 'Standing with Lindbergh, Earhart and Kingsford Smith as one of the greatest pioneers of the air, Sir Ross Smith's life is brilliantly captured in this compelling biography.' - Richard Champion de Crespigny AM, bestselling author and captain of QF32
Format: Paperback
Pages: 424
Availability: Available. Usually dispatched 1-3 business days
Publisher: ALLEN & UNWIN
Publication date: 01/10/2019
Country of publication: AUSTRALIA
Weight: 610 g
Dimensions: 234mm X 153mm
Code: 58074

Foreword Andy Thomas, NASA Astronaut (Retired) Preface Maps Text notes Prologue: Brooklands aerodrome, Weybridge, England PART ONE: 'A DETERMINED BOY' 1892-1914 1 Mutooroo 2 Froggy 12 3 A little more eclat 4 Aviemore PART TWO: 'A BRITISHER WITH HIS BACK TO THE WALL' 1914-1916 5 The Great War 6 Six-bob-a-day tourists 7 Anzac 8 Life in the trenches 9 The August offensive 10 Quinn's Post 11 Cutting some ice 12 Once more out in the desert 13 The savage satisfaction of seeing them drop PART THREE: 'A LEADER BORN' 1916-1918 14 The coming thing 15 Hadji 16 Gaza 17 Quite an airman now 18 Vengeance is only poor consolation 19 Brisfits and baggage 20 Biffy and the Bloody Paralyser 21 Armageddon PART FOUR: '14,000 MILES THROUGH THE AIR' 1918-1919 22 Preaching the gospel of the RAF 23 An awfully good time 24 South Asian survey 25 The great race 26 God 'elp all of us! 27 Class 5-unfit for all flying 28 Crossing the Mediterranean 29 Do your best but do nothing foolhardy 30 Chasing Poulet 31 The Far East 32 The bamboo runway 33 The supreme hour of our lives PART FIVE: 'THE FOREMOST LIVING AVIATOR' 1919-1922 34 Everyone has gone quite mad 35 Fame and fortune 36 Leaving an old and trusty friend 37 The aristocracy of achievement 38 Viking 39 Valhalla 40 Now he belongs to the empire Epilogue Acknowledgements Note on sources Bibliography Notes Index