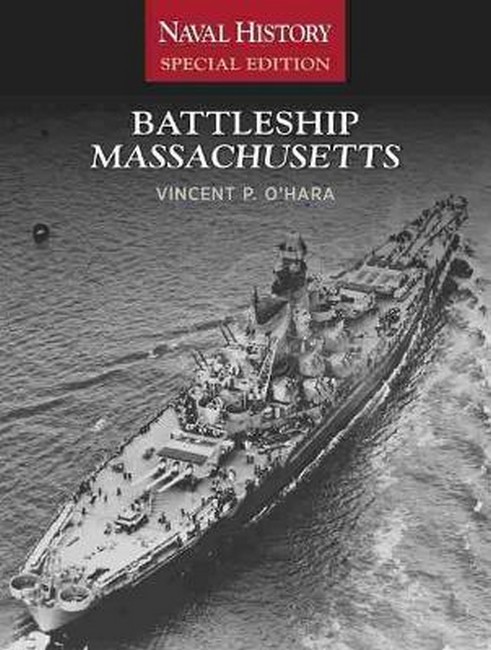 Building upon the expertise of the authors and historians of the Naval Institute Press, the Naval History Special Editions are designed to offer studies of the key vessels, battles, and events of armed conflict. Using an image-heavy, magazine-style format, these Special Editions should appeal to scholars, enthusiasts, and general readers alike.

USS Massachusetts (BB-59) is the third ship of the South Dakota-class, whose short but intense career encapsulates the story of the U.S. Navy in World War II. Laid down in July 1939. She was launched three months before Pearl Harbor. Her massive 16-inch/45 caliber Mark 6 guns were the first of their type to fire on an enemy in combat during World War II, and they also held the distinction of discharging the last 16-inch salvos of the war. Her shells fell on targets from Casablanca to the suburbs of Tokyo. She engaged an enemy battleship and protected one of the most important American amphibious operations of the war. She scored several of the longest-range gunfire hits against a moving target in the history of naval warfare, and this during her shakedown cruise with a crew that was 80 percent straight from the recruiting center.

After this remarkable beginning, Massachusetts served in the Pacific, in the Gilberts, Marshalls, Philippines, and in the Okinawa and Japanese campaigns. This Naval History Special Edition tells how she was constructed, manned, and was equipped. This work is richly illustrated with an outstanding collection of photographs covering her entire career. The content draws upon her war diaries, her action reports, and the oral histories of the men who served aboard her. This book tells the story of each of the eleven battle starts earned by Massachusetts. It is the story of the U.S. Navys unprecedented triumph in World War II.

Vincent P. OHara is the author of several works of naval history, most recently, Six Victories: North Africa, Malta, and the Mediterranean Convoy War November 1941-March 1942. He was the Naval Institute Press Author of the Year for 2015 and holds a history degree from the University of California, Berkeley.