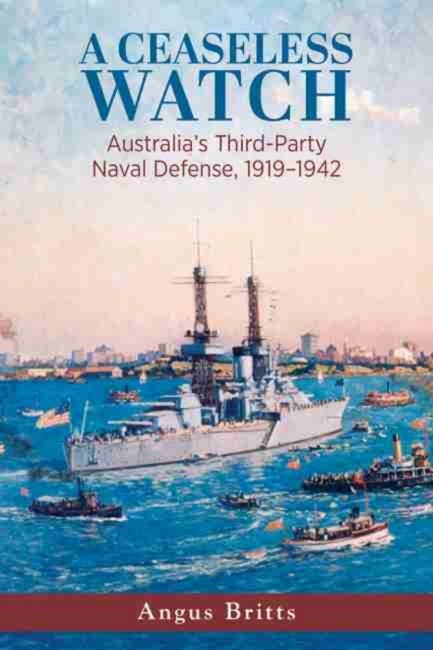 Australia's Third-Party Naval Defense 1919-1942 by Britts, Angus Code: 60654 Format: Hardback / 336 pages Publication date: 15/06/2021 Availability: Please contact us for availability Price: AU $80.30
A Ceaseless Watch: Australia's Third Party Naval Defense, 1919-1942 illustrates how Australia confronted the need to base its post-World War I defense planning around the security provided by a major naval power: in the first instance, Britain, and later the United States. Spanning the period leading up to Australia's greatest security crisis--the military threat posed by Japan throughout the majority of 1942--the work takes the reader all the way up to the defeat of the Imperial Japanese Navy by the United States Navy in the Solomon Islands campaign. Angus Britts focuses on Anglo-Australian defense relations from 1919-42 when the British were Australia's primary naval protectors until they were superseded in the Pacific by the United States in May 1942 at the battle of the Coral Sea. Britts traces the process of the alignment or divergence of differing strategic interests between Australia and Britain in particular. Taking place against the backdrop of Imperial Japan's expansionism debates within Australian political and defense circles during this period, namely the nature of the most likely threat to the continent itself, [what became?] became an important subplot to the events then unfolding in the Pacific. Looking at the development of the ""Singapore strategy"" which utilized the British fleet at Singapore to protect Australia's interests, Britts lays out how the cornerstone for Australian defense planning was based on the continued assurances from successive British governments that they would honor their naval commitments should Australia itself eventually come under serious threat from Japanese aggression. The Australian-American defense relationship evolved at a later stage within the timeframe in this work, but the varying interactions between both nations throughout the interwar years are likewise addressed, as is the foundation of their wartime relations. Britts illustrates the difficulty in forming a defense relationship between small and great powers, where the needs of the former are not subsumed by the interests of the latter, from the interwar years to the start of World War II. In an era when the entire Pacific region was at war, the inability of a larger power to fulfill its side of a defensive pact with a smaller power shaped the future of the region itself.
Format: Hardback
Pages: 336
Illustration: B&W THROUGHOUT
Availability: Please contact us for availability
Publisher: NAVAL INSTITUTE PRESS
Publication date: 15/06/2021
Country of publication: UNITED STATES
Weight: 0 g
Dimensions: 229.00mm X 152.00mm
Code: 60654