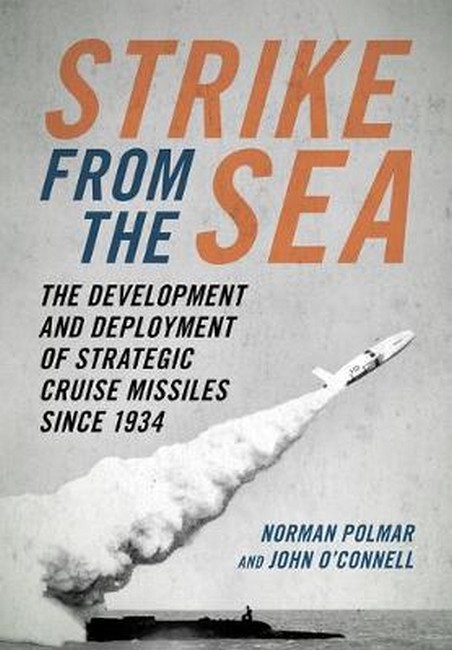 Strike from the Sea

The Development and Deployment of Strategic Cruise Missiles since 1934 by Polmar, Norman Code: 58872 Format: Hardback / 208 pages Publication date: 15/10/2020 Availability: Available. Usually dispatched from USA 1-2 business days Price: AU $80.80
The cruise missile-also referred to as a guided missile-is a widely employed tactical and strategic weapon, capable of striking ground or ship targets with conventional or nuclear warheads. Before the development of ballistic missiles for attacking an enemy's homeland the U.S. and Soviet strategic arsenals had land-attack cruise missiles to deliver nuclear warheads. Subsequently, the U.S. and Soviet Navies as well as other fleets developed tactical anti-ship and anti-submarine cruise missiles. Much of this book addresses the U.S. Navy's Regulus missile program-the world's first submarine weapon for attacking an enemy homeland with a nuclear warhead-and the similar Soviet Navy's cruise missile efforts. Prior to Regulus a few of the world's submarines had deck guns that were employed for assaulting coastal targets; indeed, the British built a class of submarine monitors with large-caliber guns for attacking coastal targets. After the Regulus more advanced cruise missiles and ballistic missiles were sent to sea in submarines to attack an enemy's cities and military-industrial installations. Certain U.S. and Soviet/Russian land-launched, nuclear-armed cruise missiles also are examined in this book in the context of their being competitive with sea-based missiles for their roles and for resources. Also, at times the technology of one service's missiles was considered for use by another service. The U.S. Navy's rapid and successful development of the Polaris Submarine-Launched Ballistic Missile (SLBM) and budgetary constraints caused the cancellation of advanced submarine-launched cruise missiles-the Regulus II as well as the follow-on Rigel and Triton. Submarines armed with the Regulus I missile continued on patrols in the North Pacific until mid-1964, when they were replaced on the 'deterrent' role by Polaris missile submarines. The Soviet Navy continued the development and deployment of anti-ship cruise missiles, which retained some land-attack capabilities. Following the retirement of Regulus in 1964 strategic cruise missile development in the U.S. Navy experienced doldrums. In the 1970s development of U.S. Navy land-attack cruise missiles resumed with the Tomahawk, initially designed as "theater" land-attack weapon with a nuclear warhead. Significantly, the Tomahawk was designed from the outset of the program to be launched from standard, 21-inch (533-mm) submarine torpedo tubes. While the Tomahawk was developed specifically for naval use from surface ships and submarines, subsequently a land-launched version was developed as a theater nuclear weapon named Gryphon for the U.S. Air Force as a counter to Soviet theater nuclear weapons in Eastern Europe. (The Tomahawk also was suitable for aircraft launch, although neither the U.S. Air Force nor Navy adopted that concept.) Subsequent Tomahawk variants with conventional warheads were developed for the land-attack and anti-ship missile roles. Sea-based Tomahawk missiles with conventional warheads-launched from surface ships and submarines-were employed extensively and very effectively in the Gulf War (1991) and in several subsequent conflicts and crises. The Soviet Navy's cruise missile programs have a similar development history and that effort has produced several land-attack weapons.
Format: Hardback
Pages: 208
Illustration: B&W THROUGHOUT
Availability: Available. Usually dispatched from USA 1-2 business days
Publisher: NAVAL INSTITUTE PRESS
Publication date: 15/10/2020
Country of publication: UNITED STATES
Weight: 0 g
Dimensions: 254mm X 178mm
Code: 58872