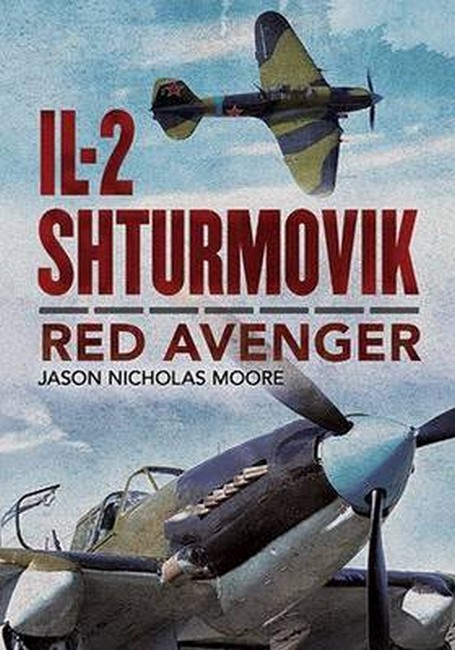 Red Avenger by Jason Nicholas Moore Code: 37979 Format: Hardback / 272 pages Publication date: 01/05/2015 Availability: In Stock. Usually dispatched same business day from Sydney, Australia Price: AU $53.99 (was AU $89.99) You save AU $36.00
The Ilyushin Il-2 Shturmovik became the aerial representative of the Soviet response to the German invasion on the Eastern Front during the Second World War. The Il-2 was designed as a low-level close-support aircraft capable of defeating enemy armour and other ground targets. Hardly a fighter, the Il-2 was exclusively engineered to take an enormous amount of punishment and still keep the pilot, rear gunner and critical mechanical components unharmed. In the end, the Il-2 would become the most important aircraft to the Soviet Union in the defence of the homeland against advancing hordes of panzers. At its height, production of the Il-2 hit a peak of 300 aircraft per month and variants boasted potent 23-mm cannon, 200 anti-tank bomblets and 4 x 132-mm rockets. The Il-2 became a highly respected and highly feared adversary. Soviet air crews dubbed the Il-2 as the 'Flying Tank' for its incredible ability to withstand a tremendous amount of damage and still release its payload only to return home intact. Not only did its rear gunners shoot down Luftwaffe aces thanks to its 12.7 -mm machine gun, the Il-2 was also used as a fighter and German pilots were amazed to see 20-mm cannon shells bouncing off its armour plates. Crews were also known to weld additional armour to their Il-2s. The Shturmovik proved so effective that many Soviet crews were recipients of the Gold Star of Hero of the Soviet Union. Even today, the Il-2 is regarded as the Russian equivalent of the Spitfire.By the war's end, some 36,000 Il-2s were produced and became the symbol of the Eastern Front.
Format: Hardback
Pages: 272
Availability: In Stock. Usually dispatched same business day from Sydney, Australia
Publisher: FONTHILL
Publication date: 01/05/2015
Country of publication: UNITED KINGDOM
Weight: 1000 g
Dimensions: 248mm X 172mm
Code: 37979

Jason Nicholas Moore is an avid air historian and modeller and has spent forty years conducting historical research and constructing model aeroplanes. Moore is currently finishing a comprehensive guide on modelling the Il-2 Shturmovik and during the course of this project, he has amassed a vast quantity of reference material on the IL-2, including relics of this aeroplane.