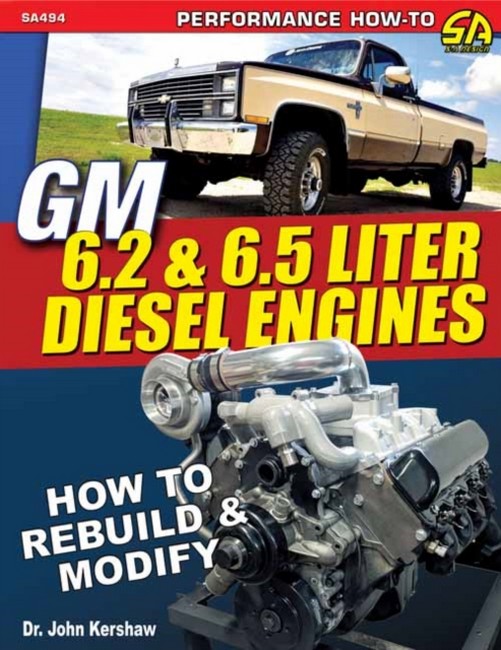 Finally, a rebuild and performance guide for GM 6.2 and 6.5L diesel engines!

In the late 1970s and early 1980s, there was considerable pressure on the Detroit automakers to increase the fuel efficiency for their automotive and light-truck lines. While efficient electronic engine controls and computer-controlled gas engine technology was still in the developmental stages, the efficiency of diesel engines was already well documented during this time period. As a result, General Motors added diesel engine options to its car and truck lines in an attempt to combat high gas prices and increase fuel efficiency.

The first mass-produced V-8 diesel engines of the era, the 5.7L variants, appeared in several General Motors passenger-car models beginning in 1978 and are often referred to as the Oldsmobile Diesels because of the number of Oldsmobile cars equipped with this option. This edition faded from popularity in the early 1980s as a result of falling gas prices and quality issues with diesel fuel suppliers, giving the cars a bad reputation for dependability and reliability. The 6.2L appeared in 1982 and the 6.5L in 1992, as the focus for diesel applications shifted from cars to light trucks. These engines served faithfully and remained in production until 2001, when the new Duramax design replaced it in all but a few military applications.

While very durable and reliable, most of these engines have a lot of miles on them, and many are in need of a rebuild. This book will take you through the entire rebuild process step by step from diagnosis to tear down, inspection to parts sourcing, machining, and finally reassembly. Also included is valuable troubleshooting information, detailed explanations of how systems work, and even a complete Stanadyyne DB2 rebuild section to get the most out of your engine in the modern era.

If you have a 6.2, or 6.5L GM diesel engine, this book is a must-have item for your shop or library.

Dr. Kershaw has more than 47 years of experience in automotive technology. He is the author of 15 GM technical training publications, as well as the published author of 5 automotive textbooks. He has developed instructional materials for GM, Nissan, FIAT, Corinthian Colleges, Ohio Technical College, IntelliTec Colleges, General Mills, and the University of Missouri at Columbia along with Penn Foster Colleg