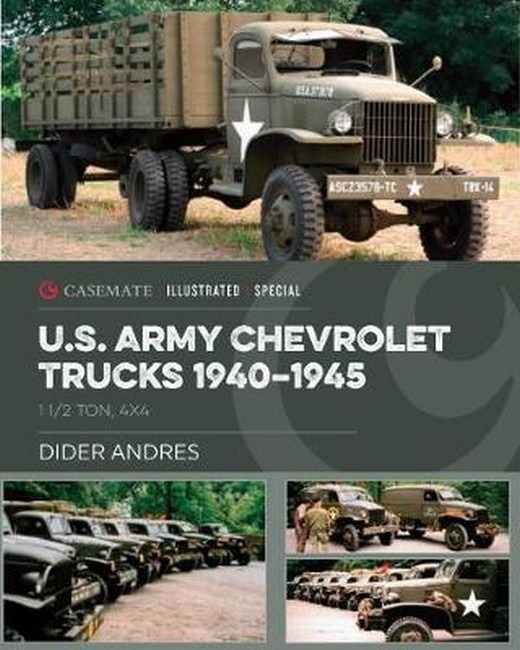 by Andres, Didier Code: 58840 Format: Hardback / 144 pages Publication date: 10/08/2020 Availability: Future Publication. Pre-order now. Due date: August 2020 Price: AU $75.00
A fully illustrated and detailed account of the 1 1/2-ton Chevy truck and its use by the U.S. Army during World War II. Between 1940 and 1945, large numbers of trucks of all categories were delivered to the U.S. Army by the Chevrolet Motor Division of General Motors. Over 160,000 of these trucks were the G-506 light four-wheel drive trucks - which became the standard 1 1/2-ton, 4x4 truck for both the U.S. Army and Army Air Corps during the war. In addition, many more thousands were delivered to Allied forces as part of the Lend-Lease program, including nearly 50,000 delivered to the Soviet Union. Tough, well-built and more agile than the deuce and a half, the Chevy 11/2ton played a part in every theater of operations during the war. Its durability and mechanical reliability made it ideal for a wide range of missions. Not for nothing did Chevy advertise the trucks during the war as "Vehicles of victory." More than 75 years after it was designed, the small Chevrolet truck is still a favourite with collectors. This fully illustrated book details the different series of trucks and their many uses within the U.S. Army including cargo trucks, panel delivery trucks for the Signal Corps, dump trucks for engineers, telephone trucks, tractors, bomb service trucks for the air force. It also covers their part in the Lend-Lease program, and their continued use after the war. AUTHOR: Didier Andres, born 1959 in Verviers, Belgium, is a military historian and specialist of American WW2 softskin vehicles. He has gathered over the years an impressive collection of original pictures and documents, that he has been sharing for 20 years with other enthusiasts, through articles and books.
Format: Hardback
Pages: 144
Availability: Future Publication. Pre-order now. Due date: August 2020
Publisher: CASEMATE BOOKS
Publication date: 10/08/2020
Country of publication: UNITED STATES
Weight: 0 g
Dimensions: 254mm X 203mm
Code: 58840