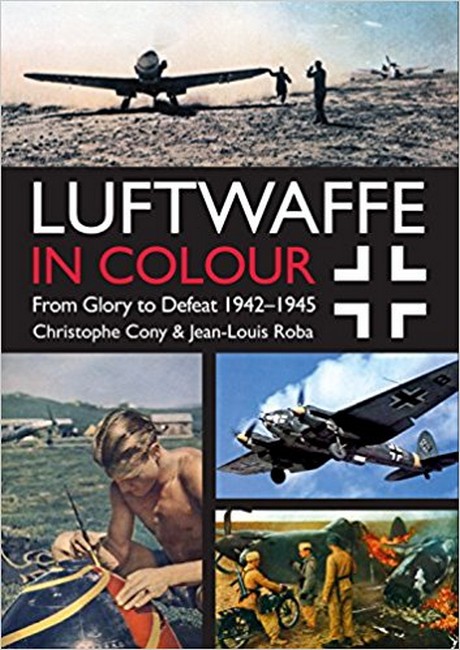 From Glory to Defeat 1942-1945 by Roba, Jean Louis Code: 48416 Format: Paperback / 160 pages Publication date: 28/06/2017 Availability: Available. Usually dispatched 1-2 business days Price: AU $49.99
Eighty years after its creation, the Luftwaffe is still one of the most fascinating forces in the history of aviation. A companion to Luftwaffe in Colour Volume 1, which covered the victory years from 1939 up to Spring 1942, this volume with nearly 400 images contains even more fascinating material on the machines of the Luftwaffe and the men who flew them, as their fate took an increasingly grim path. Initially the Luftwaffe ruled the skies but thereafter fought an increasingly futile war of attrition which when combined with vital strategic mistakes in aircraft production, was its death knell. Despite this the Luftwaffe produced the most successful air aces of all time who feature in this volume. Among many remarkable images we see one of the last Junkers 87 B-2 operational on the front line on the Eastern Front during the winter of 1942-1943, the huge BV 222 V-5 of Lufttransportstaffel in the port of Heraklion in late 1942, pilots in Tunisia in 1943, the aces Hans Philipp, Wolfgang Spate and Heinz Schnaufer and a vivid demonstration of the reversal in fortunes in 1944 as Allied bombers destroy 106 places, engulfing them in fire at Schwabisch-Hall on German soil. In this painstakingly pieced together collection, originally published in France, the full detail behind the propaganda is once more revealed, in rare colour photographs.
Format: Paperback
Pages: 160
Availability: Available. Usually dispatched 1-2 business days
Publisher: CASEMATE BOOKS
Publication date: 28/06/2017
Country of publication: UNITED STATES
Weight: 0 g
Dimensions: 254mm X 178mm
Code: 48416