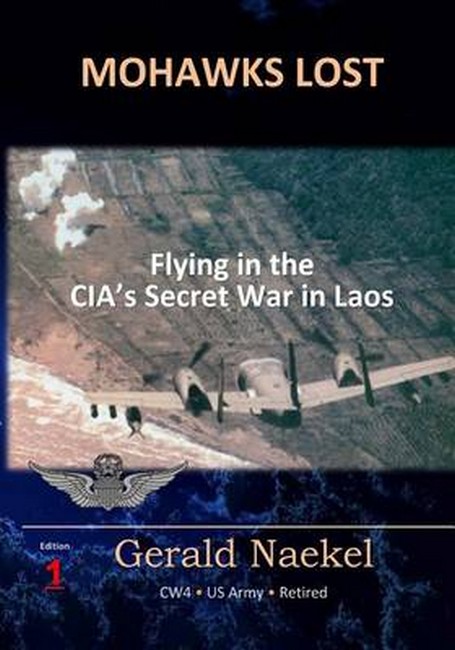 Flying in the CIA's Secret War in Laos by Naekel, Gerald Code: 40248 Format: Paperback / 330 pages Publication date: 21/05/2016 Availability: Please contact us for availability Price: AU $21.92
The true stories of over 500 of my single-pilot combat flights, almost all of them in Laos and North Vietnam during the Vietnam War. I spent about 22-1/2 months flying in the only Mohawk unit with the armed OV-1 Mohawks - until my timing and luck all ran out at the same time and I was medevac'd to the Air Force hospital at Clark AFB in the Philippines and then a series of Air Force and Army hospitals. This book, or most of it, was previously published as "WAR STORIES - From an Army Pilot Flying in the CIA's Secret War in Laos" and was for years an Amazon great seller! Now it is has been updated, grammatically corrected with over a thousand changes, but pretty much the same 5-Star book. The 131st Avn, while based near Hue in South Vietnam (I Corps, just below the DMZ), flew entirely in Laos and North Vietnam for over seven years until the last months of the war. Our secondary base for over six years was Udorn, Thailand where we flew nightly hunter/killer teams with the Air Force, Air America and Laotian forces attacking Chinese trucks and tanks across northern Laos, near (or sometimes across) the border to the northwest of Hanoi. This was the war in the Plain of Jars (PDJ) and much of this was run from the secret CIA airfield at Long Teign (Lima Site-20a), the most secret airfield in the world and home to much of the Air America fleet. Our two dozen Grumman OV-1 "Mohawks" were the only armed ones and of the five Army Mohawk units, the other four operating only in South Vietnam, the 131st lost more aircraft and men than all the other units - combined. Nightly, from Phu Bai we flew SLAR/IR hunter/killer teams in southern Laos (Steel Tiger North and South) with the AC-120 Spectre gunships attacking the Ho Chi Minh Trail around the clock. There we faced huge amounts of flak and other heavy anti-aircraft fire that were not an issue inside of South Vietnam. We ran SLAR, IR and VR (armed visual) missions around the clock in the southern ends of North Vietnam, including 24/7 SLAR missions right along the coast up to about Vinh. There the issue was Soviet SAM missiles, and flak and the rest of the heavy machine guns. Ditto for Laos. And we never got a single man back out of Laos at the end of the war. You go down in Laos - "and you are gone for good."
Format: Paperback
Pages: 330
Illustration: B&W THROUGHOUT
Availability: Please contact us for availability
Publisher: CREATESPACE
Publication date: 21/05/2016
Country of publication: UNITED STATES
Weight: 576 g
Dimensions: 254mm X 178mm
Code: 40248