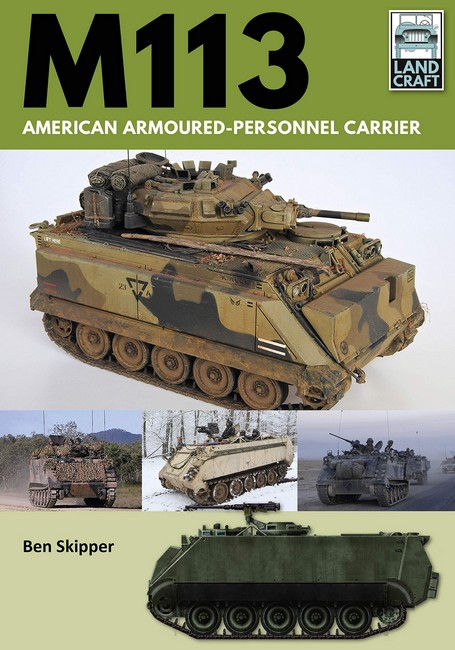 American Armoured Personnel Carrier by Skipper, Ben Code: 60280 Format: Paperback / 64 pages Publication date: 25/02/2021 Availability: Available. Usually dispatched 1-2 business days Price: AU $33.98
The M113 has become as much a recognisable part of the US military machine at war as the Bell UH-1 Iroquois and M16 assault rifle. Earning its stripes in the jungles and highlands of Vietnam, it became the most widely armoured vehicle of the campaign. Such was its prowess that the Viet Cong gave it the nickname Green Dragon on account of its ability to go virtually anywhere. Its ground-breaking aluminium hull gives the M113 a relatively low weight of 12ts, this allows it to be easily transported by air and gives it an amphibious ability. The design was also easy to modify and can carry a range of support and indirect fire weapons. From mortars to ballistic missiles, the M113 spawned a progeny of useful and innovative vehicles. The base M113 is lightly armoured and safe against only the lightest of small arms fire and shell splinter. As a result a range of up-armour packages have been used in the past, from sandbags to complex applique armour. 80,000 M113s of all types have been produced and are in use with over 50 countries, making it one of the most widely used armoured fighting vehicles to be produced. Indeed such was its popularity that the US bought their final M113s in as late as 2007. The M113 was designed and developed by the Food Machinery Corporation (FMC) to replace the heavier and less reliable steel-bodied M59 and M75 armoured personnel carriers. It was specifically designed to be lighter, air-portable and have amphibious capability. Carrying a crew of two, driver and commander, who manned the M113's only weapon, a .50cal machine gun, the M113 would transport 11 soldiers into combat before withdrawing to the rear. Powered initially by a V8 petrol engine the M113 would be continuously up-engined throughout its frontline and subsequent rear support lifespan. Changes included improved suspension, smoke dischargers and externally fitted fuel tanks. Other changes have included armoured commander's turrets and slat armour. This LandCraft title looks at the M113s development where the FMC sought to utilise its chassis into as many roles as possible, from smoke generators to flamethrowers. The book also looks at how the M113 was adapted for use by numerous overseas customers and how these are upgraded to suit local conditions. Finally the title looks at the M113's changing roles in the more sophisticated contemporary battlescape and how it's still providing service in theatres across the world in a variety of roles, both combat and support. For the modeller there is nothing more important than the little things and this image-rich section of Land Crafts M113 title delivers the goods. Filled with crisp photos that show the M113's many details, combined with helpful accompanying text, forms an enviable visual guide for the enthusiast and modeller alike. AUTHOR: Ben Skipper, a RAF veteran, is an avid modeller and writer of military themes, specialising in 20th century subjects. 200 colour and b/w illustrations
Format: Paperback
Pages: 64
Illustration: COLOUR SECTION(S)
Availability: Available. Usually dispatched 1-2 business days
Publisher: PEN & SWORD BOOKS LTD
Publication date: 25/02/2021
Country of publication: UNITED KINGDOM
Weight: 0 g
Dimensions: 297.00mm X 210.00mm
Code: 60280