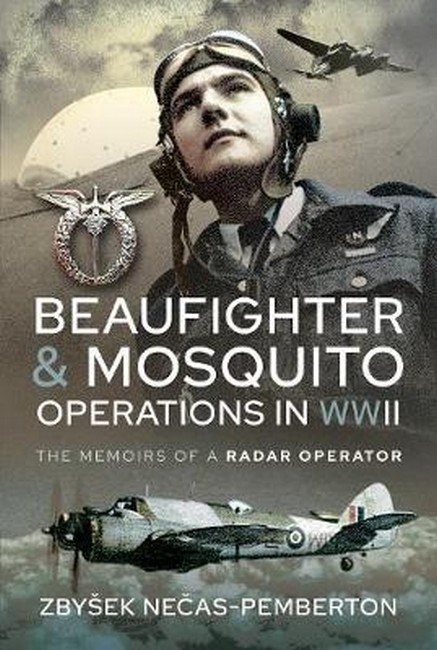 Beaufighter and Mosquito Operations in WWII

The Memoirs of a Radar Operator by Pemberton, John Code: 60271 Format: Hardback / 296 pages Publication date: 01/06/2022 Availability: Pre Order. Release date: June 2022 Price: AU $75.00
Zbysek Necas was just 18, and still a high school student, when he escaped from the Protectorate of Bohemia and Moravia a month before the outbreak of war in 1939. He managed to make his way to Britain where he had a cousin. Necas enlisted in the RAF in 1940, initially being posted as an interpreter at the Czech Depot. Some of his early duties involved the interrogation of captured German aircrew. He was, however, determined to fly. That wish came not as a pilot, but as a radar operator. In time, Necas was posted to 68 Squadron, which throughout the war had a large number of Czech exiles on its strength - one flight was entirely Czech-manned. In this moving memoir, he details just what it was like to serve as part of an RAF night fighter crew during the second half of the Second World War. From the organisation of squadron and operations, to the directing of night fighters in the bomber stream, problems of maintaining contact with the target, the duration of patrols to interception tactics, all, and more, is revealed in this book. Having trained on the Blenheim Mk.IV, Necas' operational patrols began on Bristol Beaufighters, the squadron subsequently converting to de Havilland Mosquitoes. There are of course, the graphic accounts of victory in the air. This includes combat with a Heinkel He 177 Grief over North Sea, or the explosion of a Dornier Do 217 after another successful interception. As well as nighttime intruder operations over Europe, from the summer of 1944, 68 Squadron, Necas included, found itself drawn into the battle against Hitler's V-weapons, particularly the V1. Necas' crew ended the war with three confirmed kills, one probable, and two damaged. After the war, Necas returned to his homeland where he received the tragic news that that none of his immediate family had survived the German occupation. This is Zbysek Necas' story of his part in the defence of Britain's skies and the final victory against the Third Reich. AUTHOR: Born on 6 March 1921, Zbysek Necas was just eighteen, and still a student, when he escaped from the Protectorate of Bohemia and Moravia a month before war broke out. He made his way to Britain where he had a cousin. He eventually enlisted in the RAF, and having trained as a radar operator, eventually served in Beaufighters and Mosquitoes. After the war, Zbysek returned to his homeland, only to learn that none of his immediate family had survived, having been killed in the Holocaust. He returned to the UK, re-enlisted in the RAF, and changed his name to John Pemberton to protect himself from the Communists who had seized power in Czechoslovakia. Colonel Necas-Pemberton was awarded the Medal for Heroism by the President of the Czech Republic in June 2017. He passed away on 15 March 2018, aged 97. 100 b/w illustrations
Format: Hardback
Pages: 296
Illustration: B&W THROUGHOUT
Availability: Pre Order. Release date: June 2022
Publisher: PEN & SWORD BOOKS LTD
Publication date: 01/06/2022
Country of publication: UNITED KINGDOM
Weight: 0 g
Dimensions: 234.00mm X 156.00mm
Code: 60271