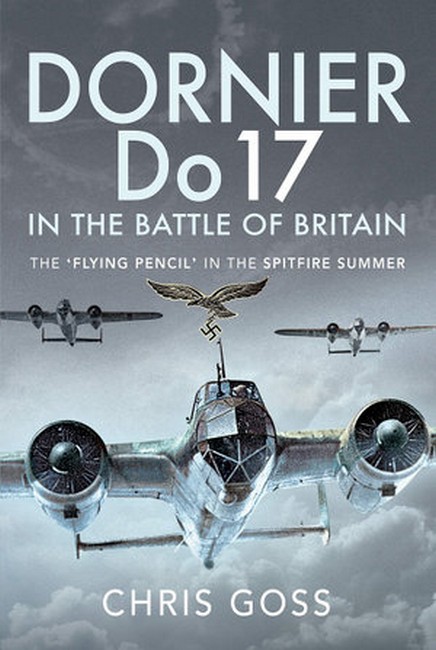 Dornier Do 17 in the Battle of Britain

The 'Flying Pencil' in the Spitfire Summer by Goss, Chris Code: 60489 Format: Hardback / 232 pages Publication date: 15/12/2021 Availability: Pre Order. Release date: December 2021 Price: AU $50.00
During Britain's desperate struggle for survival that in the summer of 1940, the Dornier Do 17 played a prominent part in raids designed at neutralising the RAF's ability to resist and the British people's will to fight back. Having been built to outrun contemporary fighters when introduced into the Luftwaffe in 1937, it had become the Luftwaffe's main light bomber, and for the attack against Britain, three bomber wings, KG 2, KG3 and KG77, were equipped with the Do 17\. But by 1940, the Do 17 was nearing obsolescence and, with its weak defensive armament, it fell prey to Fighter Command's Hurricanes and Spitfires. Its vulnerability was starkly revealed on 18 August 1940, when eight Dorniers were shot down and nine damaged in attacks on RAF Kenley, and on 15 September - Battle of Britain Day - when twenty were shot down and a further thirteen damaged. On that day, Sergeant Ray Holmes rammed his Hurricane into a Do 17 that was reportedly aiming for Buckingham Palace. Part of the bomber's wreckage fell to earth near Victoria Station. In this comprehensive pictorial record of the Do 17, the bomber's role throughout the period of the Battle of Britain is displayed in the author's unique collection of British and German photographs. These photographs, coupled with first-hand stories from those who flew and those who fought against the Do 17, bring those desperate days and dark nights back to life in the manner which only contemporary images and accounts can achieve. AUTHOR: Having retired from the RAF with the rank of Wing Commander, Chris Goss is a regular and highly respected contributor to major aviation publications in the UK, France and Germany, as well the author of more than forty critically-acclaimed books covering the air war between 1939 and 1945. Chris completed an MA with Merit in War Studies in 2001. 200 b/w illustrations
Format: Hardback
Pages: 232
Illustration: B&W THROUGHOUT
Availability: Pre Order. Release date: December 2021
Publisher: PEN & SWORD BOOKS LTD
Publication date: 15/12/2021
Country of publication: UNITED KINGDOM
Weight: 0 g
Dimensions: 234.00mm X 156.00mm
Code: 60489