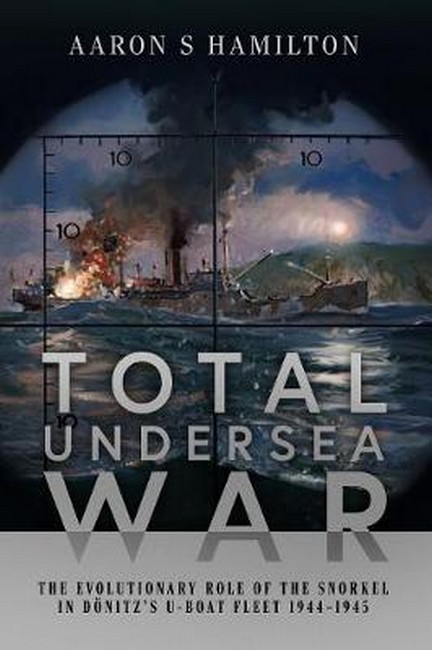 The Evolutionary Role of the Snorkel in D nitz's U-Boat Fleet, 1944-1945 by Hamilton, Aaron S Code: 59196 Format: Hardback / 400 pages Publication date: 30/07/2020 Availability: Future Publication. Pre-order now. Due date: July 2020 Price: AU $105.00
During the last year of World War II the once surface-bound diesel-electric U-boat ushered in the age of total undersea war' with the introduction of an air mast, or 'snorkel' as it became known among the men who served in Donitz's submarine fleet. U-boats no longer needed to surface to charge batteries or refresh air; they rarely communicated with their command, operating silently and alone among the shallow coastal waters of the United Kingdom and across to North America. At first, U-boats could remain submerged continuously for a few days, then a few weeks, and finally for months at a time, and they set underwater endurance records not broken for nearly a quarter of a century. The introduction of the snorkel was of paramount concern to the Allies, who strived to frustrate the impact of the device before war's end. Every subsequent wartime U-boat innovation was subordinated to the snorkel, including the new Type XXI Electro-boat wonder weapon'. The snorkel's introduction foreshadowed the nearly un-trackable weapon and instrument of intelligence that the submarine became in the postwar world. This exhaustive study, the first of its kind, draws upon wartime documents from archives around the world to re-evaluate the last year of the U-boat's deployment, all its key technological innovations, the evolving operations and tactics, and Allied countermeasures. It provides answers to many long-standing questions about the last year of the war: How and why did U-boats patrol so close inshore? How effective was acoustic and anti-radar camouflage? Why was U-boat wireless communication so problematic? How did U-boats navigate so effectively submerged? What were the health implications of staying submerged for a month or more? What does an accurate snorkel-configuration look like? This new study is destined to become the authoritative reference for all these issues and many more. AUTHOR: Aaron Stephan Hamilton is an academically trained historian. He holds both a Bachelor's and Master's degree in History, as well as the Field Historian designator awarded by the US Army's Combat Studies Institute. He is an amateur maritime archeologist with a focus on submarine history. For more than twenty-five years he has researched and published ground-breaking studies about the final year of World War II in Europe. 50 b/w photographs and line drawings
Format: Hardback
Pages: 400
Illustration: B&W THROUGHOUT
Availability: Future Publication. Pre-order now. Due date: July 2020
Publisher: PEN & SWORD BOOKS LTD
Publication date: 30/07/2020
Country of publication: UNITED KINGDOM
Weight: 0 g
Dimensions: 234mm X 156mm
Code: 59196