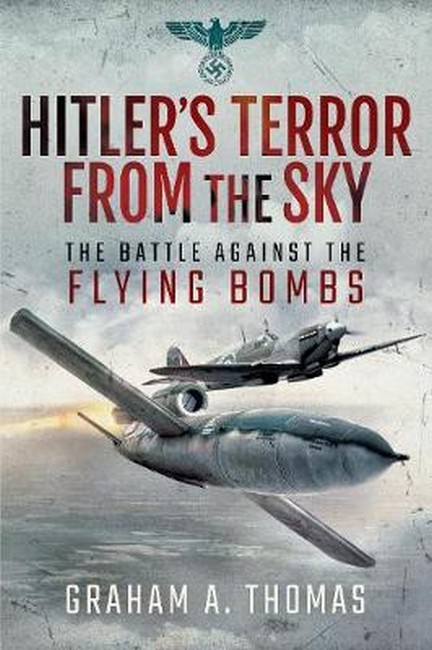 Hitler's Terror from the Sky

The Battle Against the Flying Bombs by Thomas, Graham A Code: 58981 Format: Paperback / 240 pages Publication date: 19/06/2020 Availability: Future Publication. Pre-order now. Due date: June 2020 Price: AU $36.99
Located in an Observer Corps post on the top of a Martello tower on the seafront at Dymchurch in Kent, Mr E.E. Woodland and Mr A.M. Wraight were on duty on the morning of 13 June 1944. Shortly after 04.00 hours they spotted the approach of an object spurting red flames from its rear end and making a noise like a Model-T-Ford going up a hill'. What they were watching was the first V1 flying bomb heading towards the South Coast. A new battle of Britain was about to begin. The flying bomb that the two men had observed crossed the shoreline and continued northwards. Some ten minutes later it fell to earth with a loud explosion at Swanscombe, near Gravesend. It was the first of more than 10,000 flying bombs launched against Britain that summer, most of which were targeted at London. At its peak, Hitler's flying bomb campaign saw more than 100 V1s a day being fired. Much of the UK suddenly found itself back in the frontline of the war. In the weeks and months that followed, thousands of people were killed, many more injured. In this book the author takes the reader through the day by day battle. Accounts from some of those who survived the buzz bomb attacks bring the story to life as people tell about their fears and experiences. To combat the threat, RAF fighter pilots flew round the clock patrols, desperately trying to shoot the robot rockets down and stop them from reaching their targets, whilst anti-aircraft gunners played their part on the ground. So successful was this joint effort that by the end of March 1945, the combined British defences were accounting for 72.8% of all the reported V1s that were directed at the United Kingdom. This is the story of how that success was achieved. AUTHOR: Graham Thomas is the editor of British Army Review, the journal of military thoughts for the British Army. He has been involved in journalism for most of his working life in one form or another and has written several books on piracy, aviation and military affairs. His latest book is Attack The Scheldt, The Struggle for Antwerp, published by Pen and Sword. 40 b/w illustrations
Format: Paperback
Pages: 240
Illustration: B&W THROUGHOUT
Availability: Future Publication. Pre-order now. Due date: June 2020
Publisher: PEN & SWORD BOOKS LTD
Publication date: 19/06/2020
Country of publication: UNITED KINGDOM
Weight: 0 g
Dimensions: 234mm X 156mm
Code: 58981