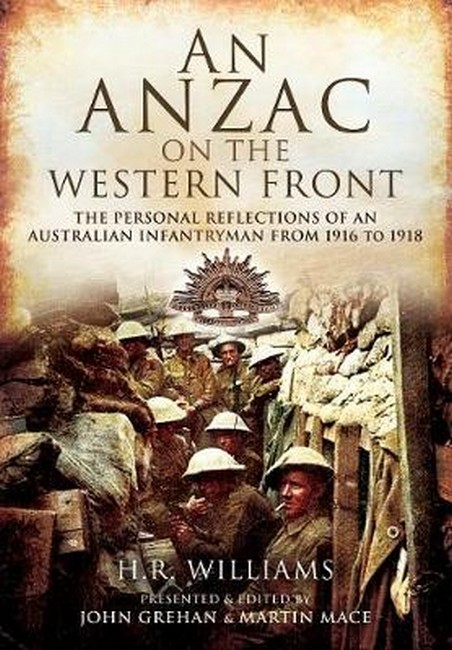 An Anzac on the Western Front: The Personal Recollections

of an Australian Infantryman from 1916 to 1918 by WIlliams, H R Code: 57880 Format: Paperback / 208 pages Publication date: 01/03/2020 Availability: Available. Usually dispatched 1-2 business days Price: AU $42.99
This is a graphic account of one soldiers service in the First World War an account that is based on a diary he maintained whilst on active service. It has been described by one senior officer as the best soldiers story I have yet read in Australia. H.R. Williams enlisted in 1915, joining A Company, 56th Battalion AIF. With this unit he would see service in Egypt and then the Western Front participating in some of the biggest battles of the First World War. Arriving in France on 30 June 1916, the battalion entered the front line trenches for the first time on 12 July and fought its first major battle at Fromelles a week later. The battle was a disaster, resulting in heavy casualties across the division. Despite these losses the 5th Division continued to man the front in the Fromelles sector for a further two months. After a freezing winter manning trenches in the Somme Valley, in early 1917 the 56th Battalion participated in the advance that followed the German retreat to the Hindenburg Line. It was spared the assault but did, however, defend gains made during the second battle of Bullecourt. Later in the year, the AIFs focus of operations switched to the Ypres sector in Belgium. The 56ths major battle here was at Polygon Wood on 26 September. With the collapse of Russia in October 1917, a major German offensive on the Western Front was expected in early 1918. This came in late March and the 5th Division moved to defend the sector around Corbie. Once the German offensive had been defeated, the Allies launched their own offensive in August 1918. he 56th fought its last major battle of the war, St Quentin Canal, between 29 September and 2 October 1918. It was resting out of the line when the Armistice was declared on 11 November. AUTHOR: Martin Mace has been involved in writing and publishing military history for more than twenty years. He began his career with local history, writing a book on the Second World War anti-invasion defences and stop lines in West Sussex. In 2006 he became the editor of Britain at War Magazine, This publication has grown rapidly to become one of the best-selling military history magazines. John Grehan has written more than 150 books and articles on military subjects, covering most periods of history. 30 b/w illustrations
Format: Paperback
Pages: 208
Illustration: B&W THROUGHOUT
Availability: Available. Usually dispatched 1-2 business days
Publisher: PEN & SWORD BOOKS LTD
Publication date: 01/03/2020
Country of publication: UNITED KINGDOM
Weight: 360 g
Dimensions: 234.00mm X 156.00mm
Code: 57880