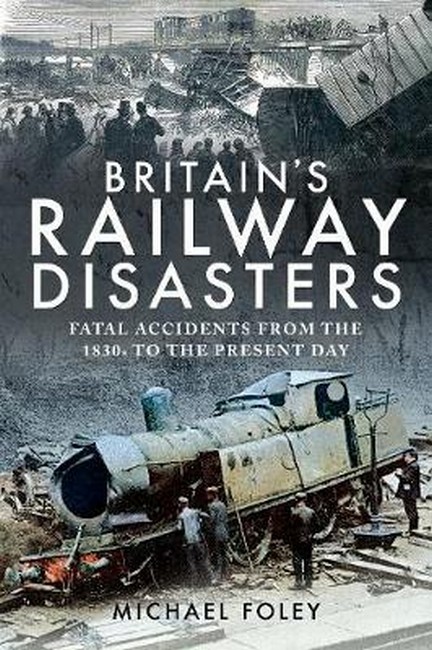 Fatal Accidents From the 1830s to the Present Day by Foley, Michael Code: 59189 Format: Paperback / 224 pages Publication date: 27/11/2019 Availability: Available. Usually dispatched 1-2 business days Price: AU $44.99
Passengers on the early railways took their lives in their hands every time they got on board a train. It was so dangerous that they could buy an insurance policy with their ticket. There seemed to be an acceptance that the level of danger was tolerable in return for the speed of travel that was now available to them. British Railway Disasters looks at the most serious railway accidents from the origins of the development of the train up to the present day. Seriousness is judged on the number of those who died. Information gleaned from various newspaper reports is compared with official reports on the accidents. The book will appeal to all those with a fascination for rail transport as well as those with a love of history. Michael Foley examines the social context of how injuries and deaths on the railways were seen in the early days, as well as how claims in the courts became more common, leading to a series of medical investigations as to how travelling and crashing at high speed affected the human body. AUTHOR: Michael Foley spent much of his career as a primary school teacher and has always had a passion for history - particularly relating to his home county of Essex. Now he concentrates on his writing and has published thirty-six books on military and local history. His other books published with Pen & Sword include: Russian Civil War (2018), Britain's Railway Disasters (hardback, 2014), Rise of the Tank (2014) and Pioneers of Aerial Combat (2013). He also writes weekly newspaper columns, and articles and stories for magazines. Many years ago, Michael trained as a guard with British Railways and has maintained a great interest in the country's railway system ever since. 100 b/w illustrations
Format: Paperback
Pages: 224
Illustration: B&W THROUGHOUT
Availability: Available. Usually dispatched 1-2 business days
Publisher: PEN & SWORD BOOKS LTD
Publication date: 27/11/2019
Country of publication: UNITED KINGDOM
Weight: 0 g
Dimensions: 234mm X 156mm
Code: 59189